A few weeks ago, a friend and I took the scenic route to McComb – through Bogue Chitto and Summit. A short pit stop in Summit for fuel and a coke turned into quite the learning experience and the making of a new friend.

Attached to the end of this mini-mart was the neatest little vegetable garden filled with the usual okra, eggplant and peppers. The garden was impressive, but it was the vine growing on the fences that caught our attention.  As we were inspecting this vine, laden with the most unusual, cucumber sized, warty, bumpy fruit, out came Nick, the store owner gardener from India. He was thrilled that somebody took interest in his garden and began his story of this most uncommon cucurbit. He told us it was not uncommon at all in India and is called a bitter melon.

The bitter melon originated on the Indian subcontinent and was introduced into China in the 14th century. The fruit is most often eaten green or as it is beginning to turn yellow. The fruit’s flesh is crunchy and watery in texture, similar to a cucumber, chayote or green bell pepper, but is extremely bitter.

Nick invited us into his store kitchen where he was cooking bitter melon. It smelled very good, prepared stewed with onions, red chili powder, turmeric and coriander. It wasn’t ready yet, so we never got a taste but we didn’t leave empty handed. Nick doesn’t grow this garden just for him. It’s his community garden, grown to share with his friends and customers. We left with a bag stuffed with freshly picked okra, eggplant and peppers.

Nick invited us to come back later in the fall. He will save for us some of the ripened seed of the bitter melon so we can sow the seed in our own gardens next spring.

A short stop for a coke turned into the making of a friendship and quite the learning opportunity. It was a fruitful experience.

Rebecca Bates is an MSU Extension-Lincoln County agent, and can be reached at 601-835-3460 or by e-mail at rebecca.bates@msstate.edu. 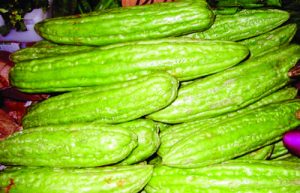 Most, if not all, educators would likely agree that pre-k is a valuable program that puts young children on the... read more