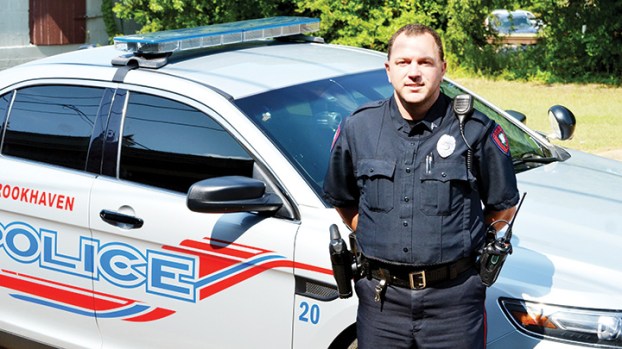 BPD officer has passion for serving

Being a police officer, helping people is just part of the job.  For Easterling, it’s what he enjoys most about his position as an officer.

“I just enjoy serving the community and fighting crime,” Easterling said.  “I have a passion for helping to make Brookhaven a better town to live in.”

Easterling, 35, is a native and current resident of Wesson.  He is the son of Irving and Susan Easterling.  He has two siblings, Shane and Summer.  He has two sons, Sawyer, 7; and Shawn, 6.  He has been a member of Easthaven Baptist Church for more than eight years.

He graduated from Wesson Attendance Center in 2001 and received his associates in electronics from Copiah-Lincoln Community College in 2004.

Before becoming a police officer, Easterling worked as a prison guard and SWAT team member in Natchez for four years.  He also worked at the Mississippi Adolescent Center for three years.

Easterling felt the call to be in law enforcement at age 25.  He applied in Brookhaven, and after Bobby Bell was made police chief, he was hired.

“I’ve always enjoyed helping people and the public, and I just wanted to serve my community,” Easterling said.

To Easterling, a hero is someone who protects and serves at all costs.  They are someone who would lay down their life and will do whatever it takes, and doesn’t expect anything in return for their service.

Easterling has been chosen by the Chamber of Commerce and The Daily Leader as a Hometown Hero.

The Lincoln County School Board finalized a few staff positions and made a last-minute change to a 16th section logging... read more