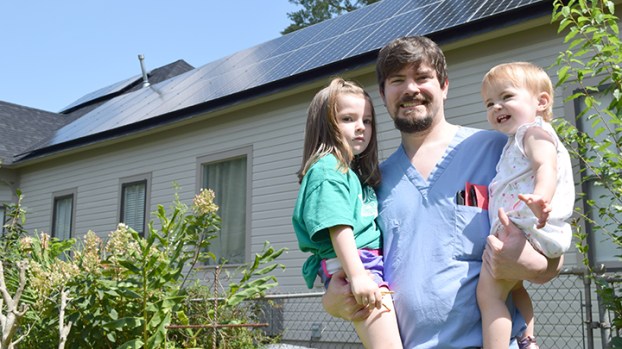 Photo by Adam Northam/Dr. Asa Reynolds holds his children — 4-year-old Gracie and 1-year-old Bea — in the backyard of his home on Jackson Street, which he equipped with 32 solar panels last month.

Down below, it’s a house of yesterday.

The old deed is framed and hanging on the northern wall, its crumbled, brown paper stained and straightened and framed in glass, bearing the signatures of Seavey and Moreton, the men who designed and built it in 1901. Like all the old homes nailed together in the time of timber, its old board floors are held up on stone columns and its ceilings are tall as two men.

Up top, it’s a house of tomorrow.

Lined up along the south-facing slope of the shingled roof, the home on South Jackson Street supports 32 rectangular solar panels — photovoltaic cells — that greet the sun each day on its arc across the Brookhaven skies, collecting and converting the sphere’s warmth into electricity that’s used below, or sent back into the grid. The state-of-the-art panels were placed on the historic home by its renovators and owners, Dr. Asa Reynolds and his wife, Sarah.

“I always liked the idea of being energy efficient,” said Reynolds, a surgeon with Brookhaven Surgery Clinic. “I hate spending money. I see this as a long-term investment that will save us money in the long run.”

Reynolds said he searched the Internet for information on solar power and ended up going with Sunpro, a Louisiana-based roofing and solar company that has installed panels on around 4,500 homes from San Antonio to Mobile. The company did an efficiency test on the house, analyzed the Reynolds’ power bill history, worked with the City of Brookhaven to permit the job, installed the panels and provides remote monitoring and maintenance.

There isn’t much data to go on — the panels were installed in early July — but so far, they seem to be working. The Reynolds’ $223 power bill from Entergy Mississippi in June dropped down to $162 in July as the cells worked hard in the sun. Power usage is lowest during the day, when the sun is shining full-bore, and highest at night, when the big AC unit sucks up power to cool the house.

On Aug. 1, a hot, sunny day, the panels produced 37.6 kilowatt-hours of electricity and exported 11 kilowatt-hours into the grid. The Reynolds’ household consumed 64.3 kilowatt-hours that same day and imported 38 kilo-watt hours, running a power deficit of 26.7 kilowatt-hours — but keeping the Reynolds from having to buy the whole 64.3-kilowatt-hour load from the power company.

After federal tax credits and other incentives, the Reynolds family paid around $20,000 for the system, financed at 2.9 percent. The panels have a 25-year warranty.

“I think it’s a unique way to increase the value of your home while being environmentally-conscious,” Reynolds said. “I’m happy we did it, and I’m excited to see how it unfolds. It’s going to take some patience, and a few years, but it will be worth it.”

The Reynolds are one of only a few Mississippi families taking in the power of the sun, and maybe the only one in Brookhaven. Solar power hasn’t caught on here, for a variety of reasons — it’s too expensive, there are too many cloudy days. The main reason may be Mississippians don’t really need solar power.

Not yet, at least.

“Mississippi is currently blessed with cheap power, mostly from natural gas, coal and nuclear — gas in particular has been very cheap lately,” said Ben Zientara, lead researcher and policy analyst with Solar Power Rocks. “But what happens when it gets more expensive?”

“The reasons are pretty clear, and can be boiled down to three words — politics, monopoly, and economics,” Zientara said.

Zientara criticized the state’s 2015 net metering law — which allows solar-equipped homeowners to offset fixed charges with energy credits for using their own electricity instead of distributed power — as more of a net surplus compensation law, saying it allows utility companies to pay reduced rates for surplus power instead of retail price.

He blamed energy companies for pressuring lawmakers and the Public Service Commission to limit the expansion of net metering, without which makes investment in solar power in Mississippi cost-prohibitive. Solar Power Rocks estimates the installation of a 5 kilowatt-hour solar system in the state would take 16 years to pay for itself, generating an annual investment return of 4.6 percent while saving $686 per year on power bills.

“You can see right away that it’ll take a long time to pay back the $20,000 cost of a solar system,” Zientara said. “Even with a solar panel lifetime of 25 years or more, not many people would do it.”

“They’ve done their best to oppose allowing homeowners to receive compensation for surplus solar energy, but they love the heck out of solar power when they get to install and control it,” he said. “The economics of utility-scale solar are great, and Entergy and Mississippi Power Corp. have both installed huge solar farms, even while asking the Public Service Commission to pass rules that disallow homeowners from offsetting fixed bill charges with those surplus credits from above.”

Zientara pointed out Entergy filed comments against net metering while the PSC was establishing the law in 2015.

Joey Lee, communications manager for Entergy, said the company proposed “modest” changes to the rules in an effort to minimize costs shifting from net metering to non-net metering customers.

“The proposed rules as originally written would have been unfair to the majority of our customers who either cannot afford to install solar rooftops or choose not to do so,” he said. “At Entergy Mississippi, we believe customers should have the choice to self-generate electricity from renewable resources and should also have the ability to provide excess energy to the distribution grid. But we believe the delivery of electricity back to the grid must be done in a way that does not harm other customers or the communities we serve.”

Several lawmakers have tried in recent years to push through state tax credits for solar power, but their bills have died unceremoniously on committee deadlines for six straight years.

Herb Frierson, the Republican commissioner of the Mississippi Department of Revenue and former state representative from Poplarville, had his bill pass the House and die in the Senate Finance Committee in 2012. In 2013, District 69 Rep. Alyce Clarke, D-Jackson, tried to get the same bill out of the House, but it died in the House Ways and Means Committee.

District 33 Rep. Tommy Reynolds, D-Charleston, tried his hand at the same legislation in 2014, but again it died on deadline in Ways and Means.

In 2015, the same bill was filed simultaneously by three lawmakers — Clarke and Frierson took another shot at solar tax credits, and District 41 Rep. Joey Fillingane, R-Sumrall, took a shot as well. All three bills died on calendar deadlines in their committees.

Since 2016, District 37 Sen. Bob Dearing, D-Natchez, has taken over the fight for solar tax credits. His bills — copies of the ones filed by Frierson, Clarke, Reynolds, and Fillingane — have all died in the Senate Finance Committee in 2016, 2017 and 2018.

“I’ll introduce it again this coming year and try to put a little more pressure on the chairman,” Dearing said. “There’s so many people out there who would like to do this, and would like to get tax credits for it. We’ve been giving tax credits to corporations, and we give them to try to entice businesses to come to our communities.”

Dearing said he first became interested in solar power when he was invited to a solar conference in Denver, Colorado, more than 20 years ago. A few years later, he said Natchez businesswoman Maureen Radzewicz pulled him to the side and began talking up solar.

Dearing said there is interest in solar investment and, obviously, the issue is not partisan. Some other reason is preventing Mississippi from improving its solar power incentives, though he couldn’t say what specifically.

“You’d have to talk to the utility companies,” Dearing said. “Having served 35 years in the Senate, I got a pretty good idea of what’s happening.”

BHS gets one way in, one way out

School officials are hoping a new traffic pattern at Brookhaven High School will be safer for students arriving for class... read more