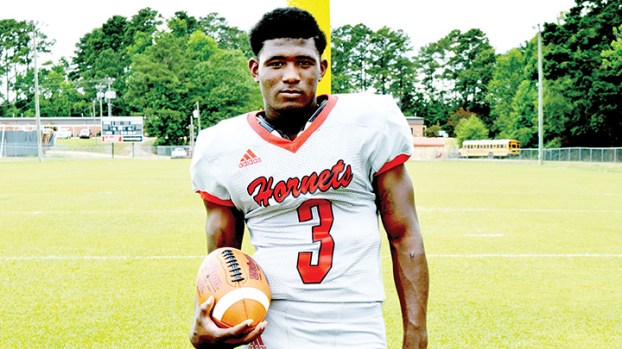 Daily Leader file photos Senior Hornet captain Desmond “Quan” Berry fills the slots of running back and corner back for Loyd Star in the upcoming season.

Berry, a senior at Loyd Star Attendance Center, is excited for the 2018 football season.  As one of the team’s captains, he is ready to lead his team to victory.

“My goals this season are to lead my team to a win every Friday night and to never give up on them,” Berry said.

Berry plays two positions for the Hornet football team, running back and corner back.  He thinks that he has improved since last season, as he has worked on following his blockers and hitting his holes harder.  He describes his team as hardworking and good.

When asked about stepping up and taking over for former team member Patrick Price, Berry became enthusiastic.  Price led the Hornet football team in the 2017 football season.

Berry looks forward to the Aug. 17 game against Sacred Heart.  Last year, when Loyd Star played Sacred Heart, Berry wasn’t put in the game.  He’ll play this year, and he is excited to show Sacred Heart his talent on the field.  There isn’t a game that the senior is nervous about, as he believes that the team will push to the end.

Berry plans to pursue a degree in underwater welding and is undecided on what college he will attend after high school.

Coach Brian Ford has positive feedback on Berry, who is a returning lead rusher from last year.

“We think that he can have a productive season, and we need him to be the man,” Ford said.

Ford expects Berry to perform double duty in his positions of corner back and running back and to lead by example with a right attitude and work ethic.

“He has the potential to step up and have a good season,” Ford said.