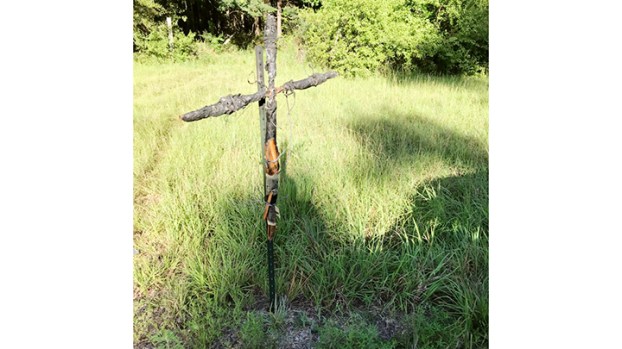 Lawrence County authorities are pondering the discovery of a burned cross erected alongside a highway — the third they’ve found in two years.

Maj. Corey Dillon with the Lawrence County Sheriff’s Office said he was riding south on Hwy. 27 Monday morning and saw the remnants of a burned cross on the side of the road.

Dillon turned around at Lea Lane and headed back north.

The cross was made of wood and fastened to a metal pole, similar to the ones found in February 2016 and earlier this year.

It was cold, but had been burned.

“You could tell it had been burned the night before,” he said.

Dillon contacted the FBI field office to report it.

He said the cross was located on the side of the highway in a stretch that’s not near any homes or businesses.

“It wasn’t in a black neighborhood. It wasn’t in a white neighborhood,” he said. “It was the same construction as the other one. Whoever set the first and second one is the same one who set the third one. I think it’s just somebody trying to seek attention. Besides the burning crosses we don’t have racial tension here.”

Deputies were alerted to a burning cross in February 2016 on Sontag Nola Road in the Sontag community. No identifying evidence was collected at the scene.

In March, motorists driving on Hwy. 27 from Copiah County discovered a burning cross and called authorities.

The cross was tied to a sign post near the county line about a mile away from the Oma community. It was still smoking from the fire, Lawrence County Sheriff Lessie Butler said.

That cross was two feet tall and was made out of materials that would burn. It was attached to the left post underneath the green highway sign, but didn’t touch the ground. A can, which he suspected contained freon, was attached to it.

The second cross was discovered just over two years after the first one.

Dillon said whoever is leaving the burning crosses isn’t committing a serious crime since it’s not at a church, business or someone’s home, but authorities would like to know who is behind the mystery.

Anyone with information is asked to call the Lawrence County Sheriff’s Office at 601-587-2961.

If all the department heads and managers in Lincoln County get their way on budget requests, supervisors will bump up... read more