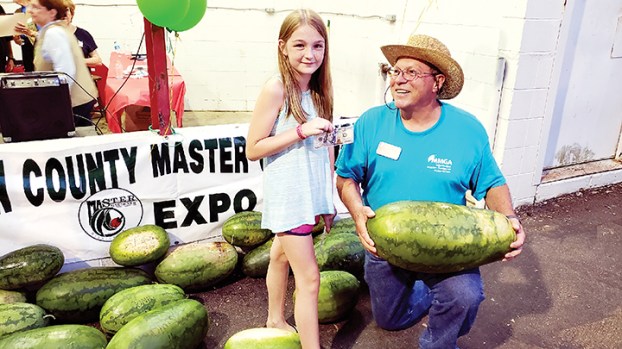 Carlie Kimble planted a handful of Congo watermelon seeds and grew them into a $100 bill.

The gardening group gave out hundreds of seeds in April to eager fourth-graders from city and county schools as well as homeschool students. The goal is to get their hands dirty and grow a desire to garden, said Master Gardener Steve Edge.

She was one of 19 contestants to enter the contest, which is a record for participation, Edge said. That’s nearly double the average, but not surprising since the Exchange Club got involved this year and offered prizes to the top girl and boy gardener from each school as well as an armband to ride for free at the fair Saturday.

Besides the crisp, green Ben Franklin Kimble pocketed, she also won a $25 gift card for being the top girl gardener at Bogue Chitto.

Sayerd Harveston of Loyd Star won second place with at 32-pound, 5-ounce melon, and Kaleigh Davis of West Lincoln was right behind him in third place with a 31-pound, 7-ounce fruit. They received cash prizes as well.

Kimble took over two rows in her grandparents’ garden. Will and Janet Johnson have several gardens in their yard that Kimble helps them tend. She’s had a hand in growing peas, butterbeans, corn, okra, cantaloup and three other varieties of watermelon. For the Congo melons, she planted the seeds and added some fertilizer.

“We just let nature take its course,” she said.

Kimble, the daughter of Alicia and Richard Kimble, has big plans for the $100 cash and the $25 gift card. She’s saving them until next summer when she’s planning a beach trip to Alabama with her mom and older brother.

Edge said he’s pleased with the participation this year and hopes it will continue to grow. He wants to see the participants continue gardening once they see that they can grow something on their own.

“They may not do it again until they’re 25 or 30 but they know they can do it,” he said. “With any luck, some years in the future, we’re going to have us another Master Gardener.”

Down below, it’s a house of yesterday. The old deed is framed and hanging on the northern wall, its crumbled,... read more