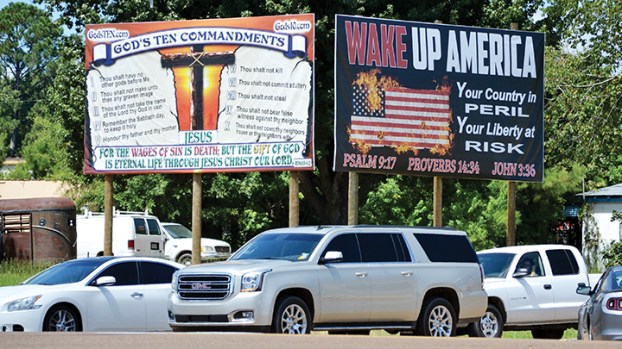 Photo by Donna Campbell A Brookhaven alderman wants two billboards on the corner of Hwy. 51 and Industrial Park Road to come down because they’re not in compliance with city ordinance.

Brookhaven Alderwoman Shelley Harrigill wants businessman Wayne Wallace to make his Ten Commandments billboard on Hwy. 51 go away and take the “Wake Up America” sign with it.

In March, Wallace, who owns Brookway Market Basket on Brookway Boulevard, put up two large billboards at a 90-degree angle on land he owns on the southwest corner of the Hwy. 51 and Industrial Park Road intersection. The signs list the Book of Exodus’ Ten Commandments on one side and a call to “Wake up America” on the other. The billboards did not comply with the city’s sign ordinance, nor did Wallace get a permit to put them up.

He met under the sign April 2 with Brookhaven Mayor Joe Cox, building inspector David Fearn and Ward 5 Alderman Fletcher Grice and came to an agreement to remove and make modifications to bring them into compliance with the city’s sign ordinance.

“We came to an agreement, and we’ll move it back to their specifications,” Wallace told The Daily Leader in March. “Bottom line is we’re going to keep the sign, and that’s my ultimate goal — to make sure the sign stays there.”

“We came to a gentleman’s agreement. It was the man’s thing to do. It was fixing to get out of hand, and I didn’t want that,” he told The Daily Leader. “People thought the city was against the word of God, and that’s not what it was — it was strictly about the sign. You’ve got a lot of hotheads, a lot of rednecks here in Lincoln County, and they’re going to do it the way they want to do it. I tried to ward off the storm that was coming, and I think I have.”

But what he hasn’t done is move the signs.

In May, Harrigill questioned why the signs were still up and not in compliance.

Fearn told the board that Wallace has the poles and the engineering drawings to bring the signs into the compliance.

“When we talked with him that day, with the mayor and Mr. Grice and I talked to him out there, it was agreed that he could keep them up until he moved them where they belong and got them into compliance,” Fearn said at the May meeting.

Wallace was not at the meeting Tuesday and the issue with the sign was not on the agenda. It came up during the aldermen’s reports.

“This will be the fifth month that we’ve had him not do whatever it was he agreed to do,” Harrigill said. “After he heard I was complaining about it (in April) he called me to say that he’d already spoken to everybody he needed to and he’d been given permission to do what he needed to do and I told him, ‘Well, you didn’t get permission from me and I’m not in agreement.’”

Harrigill’s Ward 6 meets with Grice’s Ward 5 at that corner. She said she was not invited to the meeting held in April at the sign with Fearn, Cox and Grice.

“I just think the problem is, he has a sign that’s not related to a business and because it’s not related to a business and he doesn’t go to it every day he’s on the other side of town, he doesn’t care. If it was a legit business, they’d be doing whatever they need to do to get their sign in compliance,” she said. “It’s on our side of town, it’s not on his side of town, so we’ve run into half of the year with him not being in compliance. Do we have rules, or do we not have rules? I just think he’s not following the rules and I just don’t have much patience for Mr. Wallace anymore and I’m sorry about that.”

Cox asked Harrigill what kind of permission Wallace told her he had.

“We didn’t give him permission to put the sign up,” Cox said. “We did meet with him on that piece of property. It was kind of a perchance meeting. No intention there to omit anybody.”

Board attorney Joe Fernald said he met with Wallace Monday and the city is pursuing the matter.

Wayne Ashmore isn’t going to let a little bit of fire hold up Lincoln County’s fishermen. Even though his store,... read more