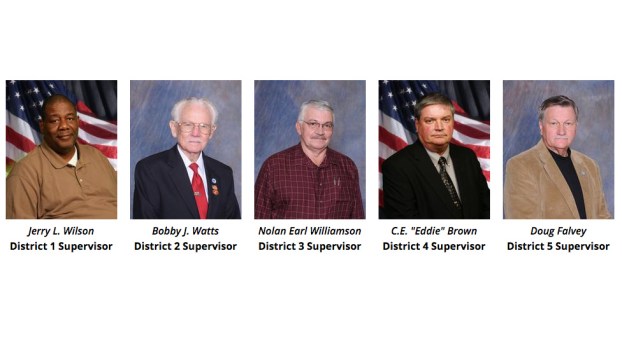 Supervisors may deny all increases; board cold toward spending in new budget

Next year could be a lean year for Lincoln County government.

County supervisors let all their financial frustrations out Thursday morning during their second planning session for the Fiscal Year 2019 budget, questioning every nickel of spending increases requested by county departments and supported funds in an attempt to keep spending at current levels with as little of a tax increase as possible. They chose a few increases they can’t avoid — like insurance costs and court funding — and sent county administrator David Fields back to his office with orders to cut out every other request for additional money.

“I’m not in agreement for increases for nobody, and I’m gonna vote against it,” said District 1 Supervisor and Board President the Rev. Jerry Wilson. “People are just gonna have to cut back. I’m doing that. If they ain’t gonna cut back, then so be it.”

The Fiscal Year 2019 budget takes effect Oct. 1, but supervisors have to hash out a draft copy by the end of August in order to meet public notice requirements before the final hearing on the plan Sept. 17. The board will meet again Aug. 20 to review the plan’s third draft.

At supervisors’ first budget work session Monday, Fields presented the board with a draft budget that included all requested spending increases — a $21.2 million plan with nearly $765,000 of extra spending — as a starting point.

The board questioned the increases but didn’t identify a particular line to cut, so Fields came back Thursday with $20.9 plan that included close to $455,000 in new money — a decrease of $310,000 that wiped out projected increases to road and bridge funds.

Supervisors were not thrilled.

“Those are the departments that need it,” said District 4 Supervisor Eddie Brown. “You’re not going to see any change in the roads until we can come up with a funding change for it. That’s just the way it is. “

Supervisors agreed to support only a handful of increases, and begrudgingly.

They’ll support small percentage increases for personnel costs in each department to meet county insurance rates that increased 17 percent earlier in the year because they don’t have a choice.

They’ll finance $50,000 over four years to replace the Lincoln County Public Library’s boiler, but only because the county owns the building.

“I wonder if the library would be interested in us deeding them the building,” said Lincoln County Chancery Clerk Tillmon Bishop, joking.

Supervisors will also support cost increases for the court systems — chancery, circuit, justice and “lunacy” — because they don’t have a choice there, either. Wilson said he was against it and wanted to call the judges before the board to explain themselves, but by law judges can override any attempt by the board to shortchange their expenses.

“You cannot be for it all you want — when he sets down the order, it’s law,” Bishop told Wilson.

Supervisors also agreed to fulfill Lincoln County Sheriff Steve Rushing’s request for an extra $137,457 for jail expenses. Rushing said the jail is housing more inmates for longer periods than its budget — last modified in 2012 — allows, and he wants an increase up front to prevent cost overruns at the end of the year.

Supervisors have also tentatively agreed to bump up taxes by a half-mill to generate an extra $217,488 to purchase new low-frequency radios for the Lincoln County Volunteer Firefighters Association. The county’s eight VFDs are stuck on outdated high-band radios that can’t communicate with other law enforcement and fire departments using the new Mississippi Wireless Information Network.

Other than those few increases, no fund is safe. If supervisors stick to Thursday’s game plan, they’ll deny requested or planned increases for Copiah-Lincoln Community College, the district attorney, the 911 program and their own buildings and ground fund.

Supervisors have also discussed cutting back their $140,000 allowance to King’s Daughters Medical Center for ambulance services, and have asked about the possibility of reducing their $80,000 annual payment for the spec building in Linbrook Business Park now that McLane Southern is paying $13,500 per month to lease it.

“If the roads and bridges don’t get anything, then nobody else gets anything,” said District 5 Supervisor Doug Falvey.

Supervisors had originally asked Fields to rework the budget with no extra spending, but at the very least insurance premium increases would make that impossible.

“It’d be real easy to leave it where it is, but odds are we’ll overspend it by the end of the year,” Fields said. “We need at least a mill in the general fund to offset insurance costs. The last thing I would want is to get to the end of a fiscal year and say, ‘Guys, we need to do a shortfall note because we don’t have enough money.’”

The board may be helped along by a projected increase in assessed value in Lincoln County, but tax collector Blake Pickering warned it won’t be enough to cover all the rising costs. Now, one mill is worth $236,000, and he estimates the new value may cause a mill to be worth $240,000 or slightly more.

Ducks in a row — Magnolia Blues wins first at festival

Last weekend in Natchez, a Brookhaven chef faced the South’s greatest cooks and covered himself in glory, and duck fat.... read more