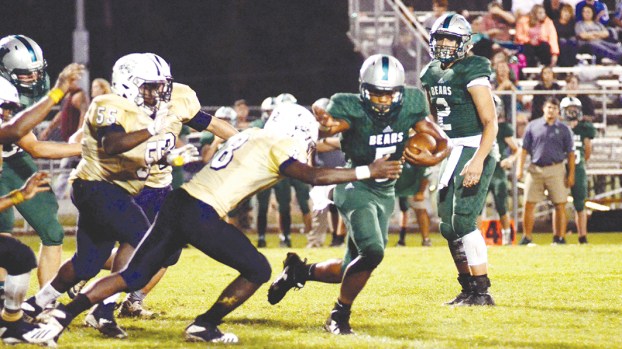 “We have a long way to go,” West Lincoln coach BJ Smithhart said. “We played a lot of new guys. I thought we played with much more intensity in this game but we still have a lot of mistakes we got to clean up.”

The Bears’ opening drive got off to a slow start as they found themselves facing a fourth down. West Lincoln elected to go for it only to see Bogue Chitto take over on downs.

Running the ball, Bogue Chitto senior Damarcus Godbolt picked up the Bobcats’ first first down of the game.

Facing a fourth and short, Bogue Chitto decided to go for the first down, but were unable to pick up yardage.

West Lincoln’s second offensive drive didn’t fare that well as they gave Bogue Chitto the ball back after failing to convert a fourth down attempt.

The Bobcats relied on their running game as senior Bryce Langley broke through the Bears’ secondary for a 50-yard touchdown. Bogue Chitto missed the point-after attempt to go up 6-0.

The Bears continued to struggle as they had to punt the ball away after being unable to sustain their offensive drive.

Going to the running game, the Bears were able to cut the ball down the right hash for a big gain. West Lincoln’s drive stalled on the next play and Bogue Chitto was able to recover.

The Bobcats went to the air and appeared to have picked up nice yards, however the receiver lost the ball on the way to the ground with West Lincoln recovering.

West Lincoln would score on a 37-yard run by junior Michael Brothern. Making the point-after attempt, the Bears went up 7-6.

Both teams tried to score once again, but when time had expired West Lincoln had won the game 7-6.

“At times we looked good on offense but we have things we need to clean up,” Bogue Chitto coach Gareth Sartin said. “We hurt ourselves with penalties, that took momentum off of our drives. Defensively, other than giving up a few big plays, we played good.”

“We definitely need to improve on the penalties,” he said. “We have a new center so we’re going to have to get on the same page. That’s what these scrimmages are good for, to work on the mistakes. I think we’ll be good come opening night. Keeping players healthy is the key and we were able to play a lot of snaps tonight which was part of the goal.”

The Brookhaven Lady Panthers pounded out 31 hits on Saturday as they kicked the 2018 slow-pitch softball season off with... read more