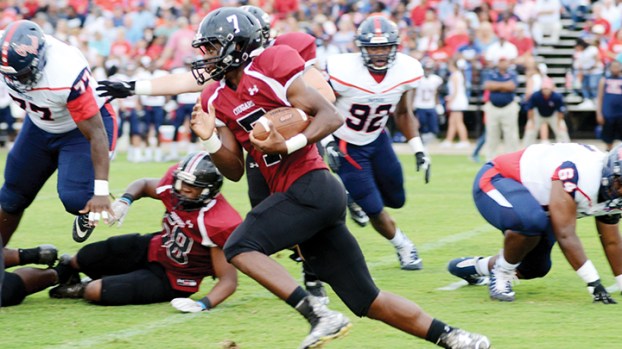 Daily Leader file photo/Lawrence County’s Antwan Pittman (7) sprints down field ball-in-hand during last season’s match up against the Brookhaven Panthers. The two teams will face off once again for the second game of this season on Aug. 24.

Anderson, a 2000 alumnus, takes over as head coach after spending 13 years as an assistant in Monticello. Anderson will lead his Cougars to Summit for a 7 p.m. matchup with the North Pike Jaguars.

North Pike, coached by longtime leader Chris Smith, is coming off of a 5-6 season that was their first in the daunting MHSAA 5A division. The Jaguars won their first 5A region game last season when they beat Wingfield 28-12. In 2017 North Pike handled Lawrence County 18-0 in Monticello. Lawrence County was a 21-13 winner of the matchup in 2016.

North Pike is paced by one of the most dynamic underclassman quarterbacks in the state, Alijah Martin. A 6-foot-3, 195pound junior, Martin threw for 1,594 yards, 13 touchdowns and eight interceptions as a sophomore. Averaging nearly 200 yards passing per game, his completion percentage was a strong 64 percent.

Martin is just as lethal on the ground and is the leading returning rusher after gaining 735 yards on 110 carries last season. Martin scored an additional four touchdowns with his feet.

However, he will be without his top pass-catcher from last season as Dylan Adams, No. 1 on the team in receptions in 2017 by 50 catches, has matriculated across the street to Southwest Mississippi Community College.

North Pike suffered a 29-13 loss to Oak Forest on Friday in the Centreville jamboree. Lawrence County had been scheduled to play a jamboree against Wesson, but an afternoon deluge made the field unplayable for fear of injury.

Anderson, who has served as a head junior high coach throughout his career, takes over from former Lawrence County coach Jayme Palmer, who stepped down after a 3-8 season in 2017. Anderson will be in charge of offensive play-calling and he expects the Cougars, a traditionally run-heavy team, to stick with what has always worked.

“We should be physical at the line of scrimmage on both sides of the ball,” he said. “That’s where our most experience lies, and those guys have shown great leadership every day in practice.”

Joseph Hooker will serve as the defensive coordinator and he’ll be closely assisted by Seth Avants.

Anderson knows his team will face a formidable challenge in trying to contain Martin, but feels his team is locked in to what they’re hearing from his coaching staff.

“Their quarterback is the real deal, maybe the best we’ll see all year. They’ve got a big offensive line and they have talent at their skill positions,” he said. “Our kids have taken coaching well and they’ll have to continue to do that on Thursday night.”

For the last 13 years as an assistant coach Anderson has been through the highs and lows of Lawrence County football. He’s been a part of south state championship appearances and one-win seasons. As he gets ready to lead his alma mater into their season opener, the excitement in his voice is palpable.

“This is definitely my dream job and I’m ready to see how our guys respond,” Anderson said. “For me, though, it’s about so much more than the game. I get my greatest enjoyment out of seeing these kids grow up every day, on the field as players and in life as young men.”

When I was a 19-year old college sophomore, at the urging of my journalism instructor, Natalie Davis, I walked into... read more