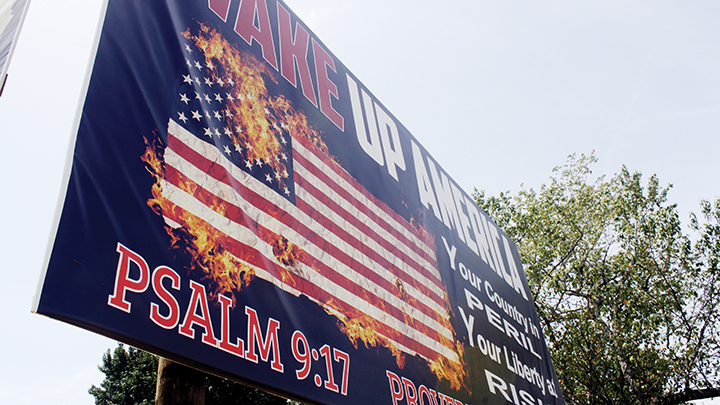 Photo by Adam Northam/The signs at the corner of Hwy. 51 and Industrial Park Road will soon be up to code, according to city attorney Joe Fernald.

A recently installed water line has put a damper on a Brookhaven businessman’s plans to move two billboards further back on his empty lot at the corner of Industrial Park Road and Hwy. 51 and out of the city’s right-of-way.

Wayne Wallace, who owns Brookway Market Basket on Brookway Boulevard, put up two large billboards at a 90-degree angle over five months ago. They list the Book of Exodus’ Ten Commandments on one side and a call to “Wake up America” on the other. The billboards did not comply with the city’s sign ordinance, nor did Wallace get a permit to put them up.

City attorney Joe Fernald said after the two billboards were erected on the small lot, the city’s contractors buried water lines in the right-of-way area. Public Works Director Keith Lewis said Wallace is aware of the lines, and should call 811 — the state’s underground utility notification service —  before moving the signs.

That’s adding to the delay in getting the signs moved.

“Now the problem is, the water line has gone through there,” Fernald said. “He didn’t do anything yet because of the water line.”

Brookhaven Alderwoman Shelley Harrigill said at an Aug. 7 meeting that several constituents had complained to her and that if he didn’t comply with the city’s requirement that they be moved out of the right-of-way, he should take them down.

Wallace met under the sign April 2 with Brookhaven Mayor Joe Cox, building inspector David Fearn and Ward 5 Alderman Fletcher Grice and came to an agreement to remove and make modifications to bring them into compliance with the city’s sign ordinance.

Wallace said in March he would remove the existing signs to reinstall them on metal supports 10 feet further back on his property in order to comply with the ordinance.

In May, Harrigill questioned why the signs were still up and not in compliance. Fearn told the board Wallace has the poles and the engineering drawings to bring the signs into compliance.

Fernald said he met with Wallace Aug. 6 — the day before the Board of Aldermen meeting — and again twice this week.

Fernald and Cox met with Wallace Monday “and had a long conversation. There’s no real problem. He’s going to take care of it. It’s just that things don’t always happen at the speed and regularity that it should, and part of it is that they were working on the right-of-way for the water line.”

The signs’ message is not the issue, Fernald said. It’s the safety hazard caused from the placement of the signs in the right-of-way. They’re blocking traffic views, he said.

“The content has nothing to do with this. The content is totally and completely protected by the Constitution of the United States,” he said. “The state has the right to limit how the sign is built and where it is in relation to property to follow the zoning laws.”

According to the sign ordinance, billboards can be constructed in a C-3 commercial district only. The maximum area of size of any outdoor advertising sign shall not exceed 300 square feet in sign area. The setback is at least 25 feet from the front property line, 15 feet to the side and 15 feet to the rear. The maximum height shall be 35 feet high and shall be supported by a single steel post.

Fernald said Wallace will soon move the signs back further on his property.

“He’s doing everything he’s supposed to do,” he said.

According to the ordinance, any person violating the ordinance can be fined not less than $50 or more than $200 plus court cost for each offense. If the violation continues without correction, each 30-day period can be considered a separate offense.

Fernald said the board could also vote to make him tear it down.

“They can vote at any time to do something about it,” he said.

That’s unlikely though, because other city officials seem hesitant to push too hard on the matter given the Christian and patriotic messages Wallace is broadcasting in print with his signs.

Harrigill said Tuesday she doesn’t object to the religious content on the billboards.

“I don’t have anything against the message on the sign. I’m concerned about the danger of the location out there,” she said. “That’s the reason I commented on it to start with. It’s in my ward and it’s an incomplete work order.”