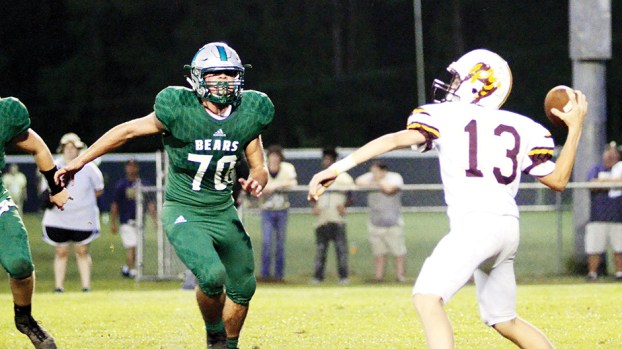 Photo by Dave Linton/Enterprise QB Matthew Burns prepares to loose a cannon as the Bears’ Cam Buckles moves to try to block the pass attempt.

“We did much better against West Lincoln,” Enterprise coach Brooks Burns said. “The players got more confidence in this game. There’s a lot of stuff we need to improve on. Need to improve on aggression and knowing what to do.”

“That’s what tonight was for,” he said. “To see how we could do against someone else that’s as good or better than we are. We learned a lot but we have a lot to improve on. I’m excited about opening night. Our schedule is very competitive but I think we have a chance to win some games.”

Starting their first drive on their own 25-yard line, West Lincoln’s ground game found a gap in Enterprise’s defense and throttled the ball all the way down to the Yellow Jacket 30-yard line.

Enterprise rose to the task and kept the Bears of the end zone as they pushed West Lincoln backwards and into a fourth down.

Failing to convert, West Lincoln turned the ball over.

Enterprise’s first offensive drive got off to a slow start as they too were looking at a fourth and five. The Yellow Jackets decided to go for it and were able to pick up a new set of downs.

Enterprise was soon faced with another fourth down and went to the passing game to get the first down.

The Yellow Jackets scored the game’s only touchdown on a three-yard run. Enterprise lined up for a two-point conversion attempt and was successful, leading 8-0.

Following the touchdown, the Bears’ next drive started at their own 20-yard line.

Getting some help by the Yellow Jacket defense via penalties, West Lincoln used their running game to move down the field.

West Lincoln looked to get into the end zone as they were facing a fourth and goal from the 11-yard line. Enterprise held tight and denied the touchdown attempt.

Enterprise closed out the scrimmage with the 8-0 win.