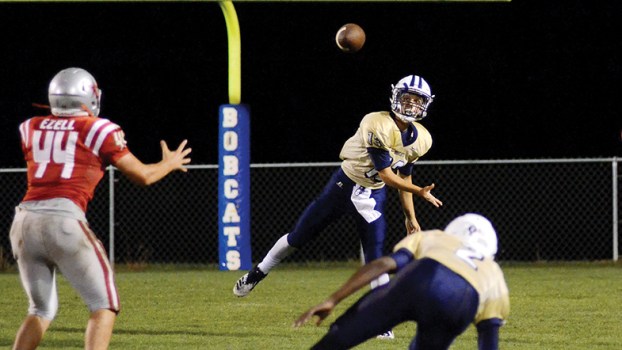 “We started out slow,” Hornets coach Brian Ford said. “In our league you can’t start out slow and expect to win many games. I feel like as the game went on we played harder and executed better and were able to make some big plays in the passing game. We bent a lot on defense and gave up some big plays but we held them when we needed to.”

Bogue Chitto relied on their passing game to open up the game, and was able to move down the field.

Facing a fourth down from Loyd Star’s 18-yard line, the Bobcats stayed with the passing game and picked up a new set of downs.

Bogue Chitto scored their its touchdown of the game off a five-yard pass from junior quarter back Shaw King to senior running back Damarcus Godbolt. Bogue Chitto missed the point after attempt to lead 6-0.

Starting on their own 35-yard line, Loyd Star aired out the ball for a big gain. The Hornets then went to the ground to eat up yards.

Loyd Star scored its first touchdown of the game when senior quarterback Dane Smith ran the ball in on a third and long. Following the successful point after, the Hornets led 7-6.

Bogue Chitto was having some success on their next drive, until a costly interception by Hornets senior Stephen Mills put an end to their drive.

Staying with the air attack, Loyd Star scored their second touchdown of the game as Dane Smith connected with junior Jarred Smith. Loyd Star went up 14-6.

After forcing a turnover on downs, the Hornets scored the contest’s final touchdown as Smith connected with sophomore Cammie Leggett, to go up 21-6.

With time running out, Bogue Chitto attempted to score as they aired the ball out deep down the field on a fourth down.

Loyd Star was able to bring down the receiver as time expired to preserve the 21-6 victory.

“We started off kinda slow,” Loyd Star senior Dane Smith said. “But after we saw how the Bobcats’ defense was playing, we adjusted and came out real strong. Defensively we had a few mistakes in the backfield with the defensive corners but other that we did pretty good.”

The Loyd Star Hornets ran through the Enterprise Yellow Jackets 21-0 Friday night in game one of the Lincoln County... read more