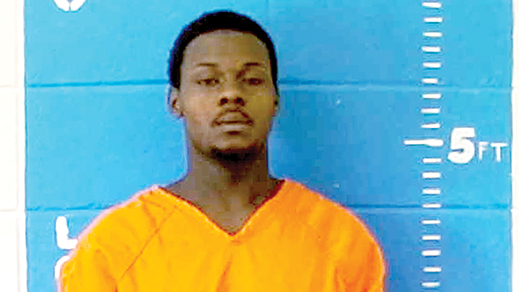 A Jackson man accused of robbing an 82-year-old woman at gunpoint in the Walmart parking lot Tuesday was jailed after he tried to hit a police officer with his car and rammed a patrol truck.

Walmart surveillance video captured footage of the victim putting groceries in her car just after 1:30 p.m. The suspect, identified by police as Burks, used a handgun to threaten the woman and took her purse.

He left in a gray Toyota Camry.

About 3:20 p.m. officer Kerrie Huff spotted the suspect on Egypt Circle in the Camry.

“She approached the vehicle and he almost ran over her. She had to run and jump back in her car,” Collins said.

Officers responded and he was spotted again by Huff and Collins at Railroad and Main streets. Pursuit continued onto Weems Street and hit Enterprise Street then Poplar Street.

“The chase was ended when he rammed detective Jonathan Alford head-on at School Street and Poplar Street,” he said.

Huff and Collins pulled up at the same time as Alford fired a shot through the windshield of his truck. It did not hit the suspect.

Burks ran from the scene.

“Officer Huff, being about 10 yards behind the suspect, took off running, closed on the suspect, caught up with him and apprehended him in the backyard at gunpoint with detective Alford’s and other officers’ assistance,” he said.

The victim was not injured and detective Capt. Clint Earls returned her purse back to her, Collins said.

“I’ve been knowing her my whole life. She’s a well-loved person,” he said. “We’ve been blessed with good police work and with the help of the community to apprehend these people committing these crimes.”

“At what point do you allow these people to commit these crimes and not try to catch them? It’s a tough decision to make and I know a lot of people may not like it, but when I deem it necessary, like when elderly people get robbed at our Walmart, we’re going to chase them and we’re going to apprehend them,” he said. “Some people in the community would never agree with us chasing vehicles. That’s not something I want to do but when they rob one of our senior citizens you better believe we’re going to do our best to get them. That’s just the way I feel about it.

“It’s a tough decision to make because if somebody gets killed or somebody gets hurt, there you go. But then, if you let them keep robbing senior citizens and people in Brookhaven, they think you can come to Brookhaven and you can do what you want.”

Huff was slightly injured in the arrest but Collins said she’ll be fine.