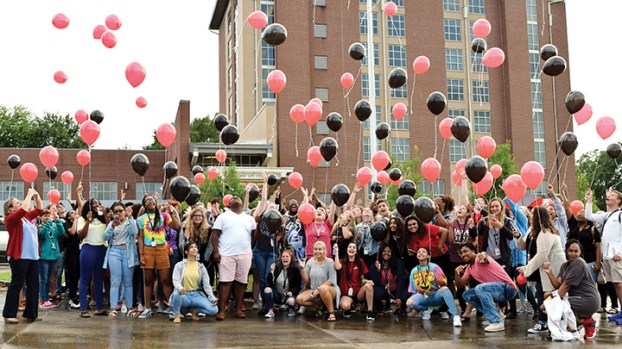 Photo by Adam Northam/Students and staff at Mississippi School of the Arts kicked off the school’s 15th year Wednesday — Aug. 15 — with a balloon release. The event was set for 5:15 p.m. to go along with the “15” theme but a rain shower delayed it about 25 minutes.

After a year in which budget cuts were so sharp writers were told not to use the printers and urgent calls went out for donations of toilet paper, the Mississippi School of the Arts finally has a little extra cash for housekeeping.

The arts school’s 15th year of operation will also be the first year it has state bond money, thanks to a $1 million appropriation in House Bill 1649 that authorizes the money for repairs and rehabilitation to the school’s campus, which is part modern student center and part historic college. MSA Executive Director Suzanne Hirsch said the bond money will be spent to open up a pair of new classrooms, repair the parking lot and install accessibility features, and other building-by-building renovations.

“One million doesn’t go extremely far for state property, but it will make a huge difference for us,” she said.

Hirsch said MSA’s top project this year would be the renovation of the third floor of Enochs Hall, one of the performance venues where students hang their art galleries and host plays and readings in the “black box” theater. The Brookhaven Trust has already provided some funding for Enochs, and the school hopes to have the project planned and ready to bid out by Christmas.

The renovations to Enochs will add two additional classrooms and a pair of restrooms — an important project to ease the strain on the school’s classroom space, which is at capacity with 131 juniors and seniors enrolled this year.

“Dot McLendon is teaching her math classes in the cafeteria because we just don’t have the space,” Hirsch said.

MSA also hopes to begin construction on repairs to the parking lot by November. The project will bring the space into compliance with the Americans with Disabilities Act and repair several holes where the concrete has failed under 15 years of traffic.

With those two projects paid for, Hirsch said the remainder of the school’s bond money would be designated toward numerous smaller projects across the campus and spent until it’s gone. Johnson Hall, where almost every student attends class, needs repairs to its windows and floors, while Lampton Auditorium needs fixes for its walls and floors.

Another project on the arts school wish list would see the construction of a new security hut at the Student Life Center, the campus’s main building and residence hall.

“We hope to get a security hut toward the front of the building instead of on the inside,” Hirsch said. “We want to move it out to where the revolving door is so we would be able to know who’s coming in before they actually get inside the building.”

As far as day-to-day operations, Hirsch said the school could breathe easier now that the 2017 financial crunch is over. Then, Gov. Phil Bryant made a percentage cut to all state agencies to close a funding gap that opened up when revenues did not meet projects.

The arts school’s cut came out to $125,000 — a hard hit to an already tight budget. To cope, students began fund raising, the community donated toilet paper and copy paper, the latter of which Gregg Office Machine Co. matched box-for-box.

This year, local lawmakers were able to sweet-talk budget planners and get MSA’s cut restored, bringing the school’s budget back up to its old $2.5 million amount.

Once again, state-owned toilet paper hangs from spindles across campus.

“We were able to give some art supply money back to the departments. They didn’t have a budget last year — everyone had a zero budget, and that was interesting, to say the least,” Hirsch said. “We reused a lot of things, we borrowed, we managed to find donations and in-kind donations. The students had to have a little responsibility to help us get the basic things we had to have. But, the arts always make do with very little.”

“We’re having a good year this year money-wise, so we don’t expect to have to go through any cuts. But if it were to ever happen again, MSA would be exempt,” said District 92 Rep. Becky Currie, R-Brookhaven. “I stuck that language in the appropriations bill, and I hope to keep it there next year.”

District 39 Sen. Sally Doty, R-Brookhaven, said she will reintroduce legislation in 2019 that would simplify MSA’s purchasing and hiring procedures. The school exists under the Mississippi Department of Education’s direct umbrella and doesn’t have the same authority as most high schools have when it comes to personnel and supplies — that same relationship with state government is why budget cuts cripple MSA while not affecting the Mississippi Adequate Education Program.

“Some of the processes and procedures they’re required to go through are very difficult,” Doty said. “It’s complex, and I plan on trying to work through that again next year.”

Library’s budget request is in the books

Books cost. Computers do, too. It takes money to keep the shelves full and the technology updated, so the Lincoln... read more