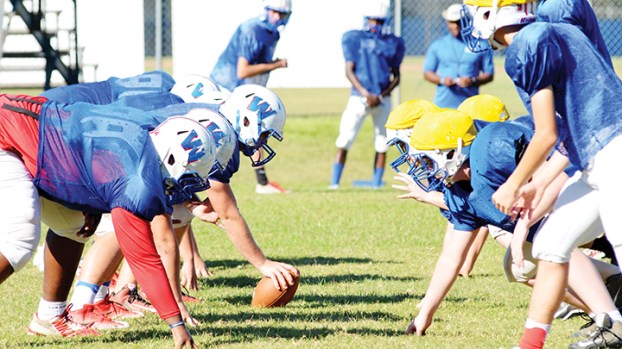 The Wesson Cobras come into the 2018 season hungry for a win.

After taking their lumps as a first-year member of Region 8-3A, head coach Jeremy Loy is looking forward to making a short drive up Hwy. 51 on Friday to play the Crystal Springs Tigers. Kickoff is set for 7 p.m.

It’s still a bit mystifying why the county rivals aren’t in the same region along with teams like Hazlehurst, Jefferson County, Franklin County and Magee. Instead, the Cobras were cast off to a more eastern-focused region that boasts defending 3A state champs Jefferson Davis, Tylertown and Seminary, among others.

Loy, beginning his third year in Wesson after previously serving as offensive coordinator at Brookhaven High, has seen his upperclassman have to grow up out of necessity.

“We’ve got kids that are older now that we had to play when they were younger, whether they were ready or not,” he said.

The Cobra offense must replace quarterback Dell Thigpen, who posted nearly 1,700 yards of total offense and scored 16 touchdowns as a senior for a team that finished 4-7. Thigpen subsequently signed with Copiah-Lincoln Community College.

Sophomore quarterback Antrelle Sims takes over the quarterback reins and Loy has seen some flashes of an offense that should be more balanced.

“I think our wideouts have really improved. They’re running routes better and the depth we have at running back is one of our biggest strengths,” Loy said. “Antrelle gets better every day and we’ve started to sharpen up our offense after having kids run our system for three years.”

Crystal Springs, coached by second-year head coach Tim McNair, is coming off a 4-7 season in which they dropped their 2017 season opener 32-12 to Wesson. The Tigers took a 16-6 jamboree loss last week at the hands of Jefferson County.

The Crystal Springs offense is directed by senior quarterback Tadorious Barnes. At 5-foot-8, 2l5 pounds, Barnes has played fullback and middle linebacker in the past. This season, he’ll be under center and Loy expects to see him taking off on quarterback runs more often than not.

“Their quarterback can throw it, but he’s a powerful guy and they’ll run him a lot behind what’s a pretty big offensive line,” Loy said.

When he does throw, Barnes will be looking for senior wide receiver Malik Jones. At 6-foot-3, Jones has the length to make plays as a receiver and will also sometimes line up under center.

For his team to stop the Tigers, Loy knows they’ll have to run to the football together. Damien Smith (82 tackles) and Jim Guess (79 tackles) are two of the leading returners for the Wesson defense.

“Our defensive line and linebackers have a lot of experience and we’re going to need them to fly around and find the football. Gang tackling is going to be a big part of what we’ll have to do to win,” Loy said.

“Our kids are ready to play. Having our jamboree getting rained out kept them from getting to hit someone other than their teammates,” he continued. “We’ve done some stuff during the week to simulate the speed of the game, but you never know how they’re going to respond until they get out there and get hit by someone in a different jersey.”

Loyd Star will open its season Friday when the Hornets travel to Hattiesburg for a 7 p.m. kickoff against Sacred... read more