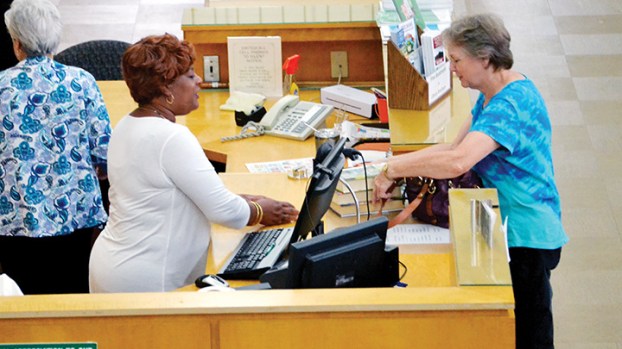 Library’s budget request is in the books

Books cost. Computers do, too. It takes money to keep the shelves full and the technology updated, so the Lincoln County Public Library’s Board of Trustees is asking for a little help from city leaders.

Board President LaKesia Bryant met with the Brookhaven Board of Aldermen recently to put a bug in their ears about putting books on the shelves. She brought with her Henry Ledet, director of the Lincoln-Lawrence-Franklin Regional Library system, whose office is at the main branch on South Jackson Street in Brookhaven.

Aldermen will likely be considering several requests over the next few weeks as they prepare the city’s budget. A public hearing is set for Aug. 28 at the Lincoln County-Brookhaven Government Complex to get input on the budget from the community.

Bryant updated aldermen on the library’s improvements in the past year.

“The library has had a great year in spite of losing $80,000 in state funding,” she said. “Through grants and fundraising efforts, the library has been able to continue its capital improvement campaign.”

They’ve added to the permanent art collection, which is displayed on large panels in the center of the lobby. Art has been acquired through a grant from the Mississippi Arts Commission and through a private loan. The display panels for the paintings was constructed through money received through a fundraising campaign by the board of trustees.

“All of these paintings have been acquired without using tax dollars,” she said.

Other art on display is provided by the Brookhaven Regional Arts Guild. Bronze pieces by Dr. Kim Sessums and the late Bruce Brady are also included in the gallery.

Bryant said a new meeting area on the second floor was furnished through grants as well.

Others items included in the capital improvements are new computers for staff and patrons, new wiring to improve computer reliability, new wireless routers to increase speed and reliability of connection, training for staff, improvements in non-fiction and fiction printed book collections as well as digital and audio book collections. Two new scanners have also been acquired to add documents to digital archives, and the library is converting microfilm resources to digital format.

“All of these improvements have been made through the hard work of the library friends group, trustees and staff,” she said. “These improvements have created a wonderful and inviting space for library users who have visited the library on an average of 350 times per day, checked out almost 100,000 books in the children’s and adult area last year, held meetings for over 3,500 people in the library’s meeting room, used the library computers and wireless system to create resumes, apply for jobs, file income taxes and take online classes and tests among many things.”

She said patrons have come in to study for the GED program through the partnership with Co-Lin, used the library’s extensive archives and genealogy collection to study regions and family history, participated in summer reading programs and children’s story time, and used the library’s three computers dedicated to the children’s program.

Alderwoman-at-Large Karen Sullivan thanked Bryant for what the library offers the community.

“It’s wonderful,” she said. “I’m really proud of the library.”

Ledet offered some thanks to the city as well.

“Your road crew fixed the pot hole at Monticello Street at the entrance to our parking lot. You don’t know how much coffee I have spilled going to work,” he said. “Those guys were out there before 7:30 working on that and they deserve a lot of credit for that.”

Other board of trustees members, who were not present at the meeting, are William Allen and Helen Lynch representing Lincoln County, along with Bryant; James Nix representing Franklin County; and Celeste Ward representing Lawrence County.