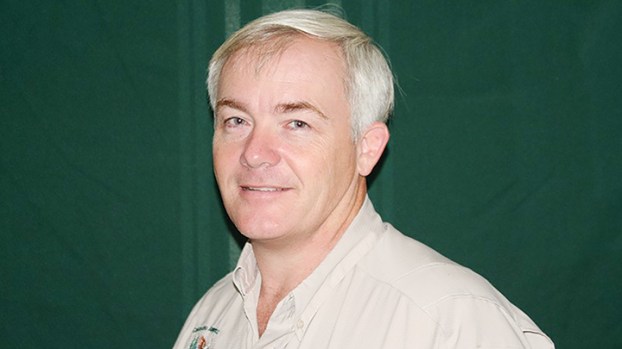 The Homochitto is now Jonny’s woods.

National Forest Service wildlife biologist and natural resources professional Jonny Fryar is the new Homochitto district ranger, the top administrator in the Meadville office overseeing the care and management of all 192,000 acres of the Homochitto National Forest, from Allen to Caseyville to Darrington. He took over on Aug. 6, likes what he’s seen so far and hopes to keep seeing it for years to come.

“My goal is to get out and work with everybody as best we can and make it the best district we can possibly make it,” Fryar said. “Everybody here is very dedicated — some of the people have been working here for more than 30 years, and I appreciate the dedication I’ve seen since I showed up.”

Fryar, 52, has been in the wild across the nation throughout his career.

A native of Olla, Louisiana, and a United States Air Force veteran, he began working for the forest service as a research technician, studying the pine beetle, after graduating from Louisiana Tech University in the early 1990s. He went back to school for a degree in wildlife biology and worked for the U.S. Army at Fort Polk as a wildlife biologist, then came back to the forest service in the same capacity.

Even after seeing the hills of Arkansas and the high mountains of the Rockies, Fryar is still impressed with the Homochitto.

“The forest here is beautiful — the ground here is fertile, and these valleys and bottoms, these drains and hills grow a lot of big timber, tall trees, very old,” he said. “There’s just a richness here in the Homochitto. A good job has been done managing this forest over the years. These big trees, a lot of national forests across the country don’t have those left.”

Fryar said one of the most challenging duties he’ll face is the battle against his old nemesis, the pine beetle.

“This is one of the busiest places I’ve ever been with this volume of pine beetles,” he said. “You’ve got steep terrain, and some of these outbreak spots are off the road a good ways. Before you go in there and cut, you have to plan it out, have your archaeological surveys and all the work done — traditionally we know where we’re going to cut and we do the work two or three years ahead, but you can’t do that with these pine beetle outbreaks.”

Fryar said he would work to make sure the forest service’s motto — caring for the land and serving the people — is carried out in the Homochitto.

“We try to make the right choices to include everybody, to manage this land for the whole nation,” he said. “Sometimes that’s not easy to do because you have so many conflicting issues, but everybody here is very dedicated, and I like it here. Good place, good people, good district.”

A Brookhaven native is bringing a little taste of the Virgin Islands to Southwest Mississippi in September when his band... read more