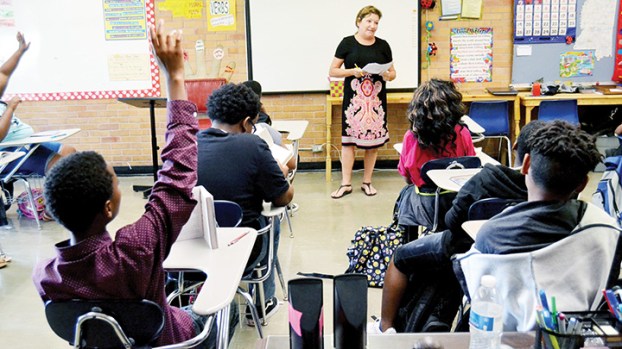 Student assessments released Thursday by the Department of Education show the highest percentage of students in the Brookhaven and Lincoln County school districts possess at least a general mastery of English and math, with a few showing proficiency in those subjects.

However, some grades in a few schools show the highest percentage of students scored below passing, meeting only basic or minimal standards on the 2017-2018 Mississippi Academic Assessment Program, which scores student performance in English and math for grades 3-8, and English II and Algebra for high schoolers.

Results in English Language Arts and math are divided into five levels for districts, schools and students. The highest percentage of students in the Brookhaven School District and Lincoln County School District scored Level 3 (passing) or Level 4 (proficient) in both ELA and math, according to the results. Science and social studies scores are expected to be released later this year.

Some grades show results in English and math that are considered basic or minimal.

“We are happy with the results overall,” said Rob McCreary, director of federal programs. “We showed growth in proficient and advanced students in almost all categories. Even with that there is always room for improvement.  We want those percentages to be at or above the state average in all categories and we are working every day to try and achieve that.”

Brookhaven Elementary School fourth-graders in math scored 33.8 percent at Level 2, with the next highest percentage of students scoring at Level 3.

“We showed gains in all schools as compared to the previous year, but we had several schools that scored at or above the state average,” McCreary said. “Sixth-grade English and high school English II are good examples. Our best example was in eighth-grade math which had 42.7 percent of its students score proficient or advanced — above the state average — and eighth-grade algebra.”

In the Lincoln County School District, 63.8 percent of the Loyd Star fourth-graders tested in math had only a basic or minimal mastery of the subject, with 21.7 percent showing general knowledge of it. Only 14.4 percent of the students were either proficient or advanced in their knowledge of the test subject.

Loyd Star eighth-graders also struggled in math on the MAAP tests. Sixty-nine percent of those tested scored in basic and minimal, while just 5.7 percent scored proficient and advanced.

The majority of Bogue Chitto eighth-graders tested scored in the passing level with 32.6 percent at Level 3.

The MAAP assessments measure students’ progress toward academic goals that equip them with the skills and knowledge they need to succeed in jobs and college. Mississippi teachers helped develop the tests, which are aligned to the Mississippi College and Career Readiness Standards.

The MAAP was first administered in the 2015-16 school year. Mississippi’s plan for improving student achievement calls for 70 percent of all students to be proficient in ELA and mathematics by 2025.

“The results show us that what we are focusing on is working,” McCreary said. “We know that we are working as a district to reach the state goal of 70 percent proficient or advanced. We also know as a district that this process takes time. But we feel that we have the pieces in place to steadily move up in growth and proficiency each year.”

The MDE MAAP results show achievement is continuing to rise among all student groups in the state. Overall, students across the state showed statistically significant gains in both ELA and mathematics. The percentage of students meeting or exceeding grade-level expectations on ELA assessments increased from 36.7 percent in 2016-17 to 39.8 percent in 2017-18, and from 38.6 percent to 43.9 percent on mathematics assessments.

The reading portion of the third-grade MAAP English Language Arts assessment is used to determine whether a student qualified for promotion to the fourth-grade. If students do not pass the Algebra I or English II assessments, they have several other options to demonstrate that they qualify for promotion.

According to MDE, teachers will use scores to guide their instruction so they can provide additional supports in the areas where students need improvement or more challenging work in areas where they excel. Scores will also be used to measure how well schools, districts and states are doing against the standards. Parents will receive their students’ score reports in the fall. Each student’s score report will indicate his/her performance level.

“This year’s assessment results show the major strides students, schools and districts have made toward improving student achievement statewide,” said Carey Wright, state superintendent of education. “There is no limit to what students can accomplish when they are challenged to succeed and provided with high-quality instruction and support. I am incredibly proud of our students, teachers and school leaders.”

While no single test can give a complete picture of achievement, annual assessments measure performance of meeting grade-level expectations and can provide important information about student progress and areas for improvement, especially when combined with student grades and teacher feedback.

Students in the Brookhaven School District will get a copy of their report on the first parent report card day in October.

“We chose this day so the parent can sit down with the teacher and discuss any questions they may have and work together on a course of action to make their child successful,” McCreary said.

Students scores on the MAAP are divided into five levels:

• Level 1 — Minimal: A student performing below the Minimal level inconsistently demonstrates the knowledge or skills that define minimal level performance.

• Level 2 — Basic: Students at the Basic level demonstrate partial mastery of the knowledge and skills in the course and may experience difficulty in the next grade or course in the content area. These students are able to perform some of the content standards at a low level of difficulty, complexity, or fluency as specified by the grade-level content standards.

• Level 3 — Passing: Students at the Passing level demonstrate general mastery of the knowledge and skills required for success in the grade or course in the content area. These students are able to perform approaching or at the level of difficulty, complexity, or fluency specified by the grade-level content standards.

• Level 4 — Proficient: Students at the Proficient level demonstrate solid academic performance and mastery of the knowledge and skills required for success in the grade or course in the content area. These students are able to perform at the level of difficulty, complexity, or fluency specified by the grade-level content standards.

• Level 5 — Advanced: Students at the Advanced level consistently perform in a manner clearly beyond that required to be successful in the grade or course in the content area. These students are able to perform at a high level of difficulty, complexity, or fluency as specified by the grade-level content standards.

A breakdown of students’ results in English Language arts and math by district and school is available at MDEK12.org.

After a year in which budget cuts were so sharp writers were told not to use the printers and urgent... read more