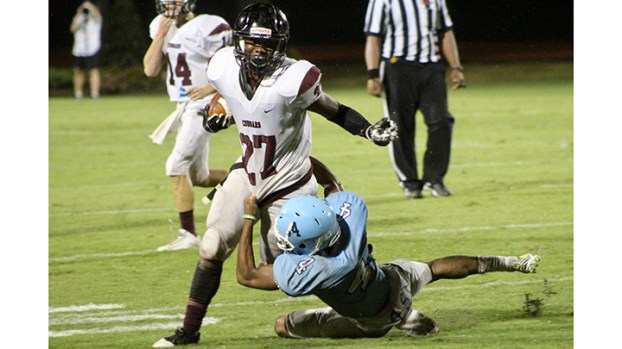 You could see in his eyes that Lawrence County head coach Jesse Anderson knew what was coming. His players rushed in with an overflowing cooler of ice water and dumped it directly on his head.

The post-game shower capped off an impressive debut for the first-year coach, as his Cougars scored early and often in a dominating 53-27 win over North Pike.

The game was delayed 90 minutes after strong weather moved through the area with thunder and lightning that temporarily cleared out the bleachers at Southwest Mississippi Community College.

The matchup would appear to be a contrast of styles. North Pike relied on quarterback Alijah Martin and his abilities to make throws in the passing game. Lawrence County ran the football.

The Cougar ground game was unstoppable from the opening kickoff until the final whistle. Lawrence County never punted, broke off long runs, had the type of grinding drives that will make a team want to say, “uncle,” and used an army of different ball-carriers.

The Cougar offensive line looked to be having more fun as the game went on. Senior center Joe Lee Rutland said his team felt confident they would move the ball.

“We came out and knew we were going to give our running backs holes to run through,” said Rutland, as he fought back postgame cramps by sucking on a bottle of Hellmann’s mustard.

The first two Lawrence County scores came courtesy of North Pike turnovers. The Jaguars struggled to hold onto the wet football and gifted the Cougars with a short field on consecutive drives.

After the first Jaguar turnover, it only took two plays for the Cougars to grab the lead. Junior Perez Tyler took off on a 45-yard run that ended at the North Pike 10-yard line. Tyler would also score on a 38-yard run in the second half.

On the next play Kylan Cooper scored to give Lawrence County a 6-0 lead. Just four minutes later the Cougars scored on an 11-yard run by Ahmad Brown that was set up by a Martin fumble.

After North Pike pulled within a score on a 55-yard touchdown pass, the Cougars hit their biggest play of the night. Cooper shot past the second level of the Jaguar defense and raced to the end zone on a 70-yard touchdown run.

Jerome Dudley would add another Cougar score in the second quarter when he punched it in from the 2-yard line.

Lawrence County would eventually spread their second half lead to 47-14 before North Pike scrambled in the fourth quarter to cut the lead to three scores.

Tywan McLaurin and Quincy Lewis each had 2-yard scoring runs for the Cougars in the second half.

The Lawrence County defensive line, led by the play of end Stephen Pierce, rarely gave Martin a clean pocket to throw in.

The physicality of the running game — the Cougars only attempted one pass all night — is what Anderson wants his team to hang their hat on.

“We have a style of play and our kids know we’re going to come out and play that way, regardless of the field conditions or weather,” said Anderson.