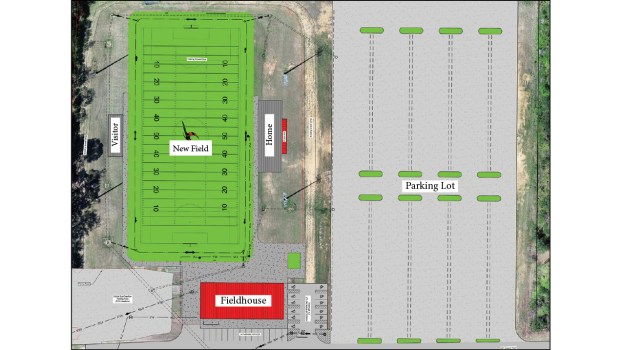 Graphic provided by Dungan Engineering/The Lincoln County School Board will decide within one week whether to move ahead with plans to build a proposed $1.9 million football and soccer facility at Loyd Star Attendance Center.

The Lincoln County School Board has one week to decide whether the district will build the grandest sports complex in the county at Loyd Star.

The plan for the Loyd Star Football and Soccer Complex, long in the works, was unveiled to the board during a regular meeting Monday evening. This gave the full board its first look at the proposed $1.9 million facility, which will consist of a playing field for both football and soccer, a single large building to house teams and concessions and an adjoining parking area. While the plans are still being finalized, project engineer Ryan Holmes, of Dungan Engineering, told board members the groundwork is complete and a timely approval is critical if the Hornets are to play football and soccer there in the fall of 2019.

“If this is going to be a turn-key approach, time is of the essence. If we slide this back a few months, making changes, we won’t hit our deadlines,” he said. “We can set it up where it’s a turn-key thing — we can bid it all out, and it’s done.”

Holmes presented the board with a timeline that begins with their approval and moves to a deadline for final project design on Oct. 1, bid-opening on Nov. 8 and awarding a contract on Nov. 18. The project is expected to require six to eight months and should wrap up next July, giving Loyd Star a spare month for finishing touches and readying the facility to host football games.

The board tabled the decision Monday and will return to vote on the project at a special-called meeting at 5 p.m. Tuesday.

The plans they will vote on call for a brand-new complex to be built on an approximately 12-acre piece of land to the northeast of the school on district-owned property, with an access road connecting through from the existing campus to Jackson-Liberty Road.

The facility will consist of a single playing field large enough to host both football and soccer games, watched over by an 800-seat home-side stand of bleachers and a 400-seat visitors’ stand, with a press box on the home side.

The field will be served by a single 7,500 square-foot building, designed by Natchez’s Waycaster and Associates Architects, that will house home and visitors’ locker rooms, each with a capacity for 40 players; a concession area; public restrooms; weight and training rooms; a laundry area and team showers; and an office for the coach.

The facility will be served by a 463-slot gravel parking lot and accessed by a concrete plaza, with concrete sidewalks reaching to the bleachers on both sides. Separate parking areas for the disabled and for referees are included, as well as a lot for visiting buses.

“Can we afford $1.9 million all at one time?” asked board Vice President Ricky Welch. “Can we afford it if we have some kind of disaster come up? I just don’t wanna get handcuffed.”

The board can definitely afford it.

District business manager Sam Stewart said the board has $6.72 million in a pair of construction funds, set up in 2005 and used over the years to build gyms, athletic fields, classrooms and other projects around the district. The board can pay for the new Loyd Star complex and still have around $4.8 million remaining.

Superintendent Mickey Myers pointed out Loyd Star’s existing field is in constant need of repairs — the press box was recently condemned and torn down, and electrical problems are affecting the lights.

“If we play there next fall, we’ll have to sink a little more money into it,” he said.

Lack of a press box and lights that could go out on Friday nights aren’t the only problems with Loyd Star’s existing football field.

Sambo Smith Field was built in 1964 and features light poles inside the stadium that make it impossible for the school to host soccer — a popular sport at Loyd Star, which formed the district’s first team back in 2003.

“We don’t even have minimal dimensions for a soccer field. Right now, we have to play across town at the sports complex,” said Loyd Star Principal Robin Case. “We’re thankful there’s a complex we can use, but it would be a whole lot more convenient for us to play soccer here at home.”

Building the new sports facility adjacent to campus would also free up the existing football field for construction space if Loyd Star ever needs to expand, and allow school traffic to be rerouted, said board member Kay Coon.

“The original vision for this project was to move traffic off Hwy. 550 and create more classroom space, because at the time there was no more land available,” she said. “We really want to get that parent pickup line off the highway.”

The original vision dates back to 2004 and has been very slow in coming. In 14 years, the site has been cleared and graded, and power poles have been installed but not fed with electricity.

“My first month in office, a guy from the power company came by and said, ‘Mr. Myers, your power poles will be here tomorrow.’ I said, ‘OK, you’ll have to enlighten me,’” he said.

The board had grass seeded on the field earlier this year, and the playing surface should be healthy and green as the field is built around it. Holmes said planting the grass early instead of sodding the completed project likely saved around $60,000.