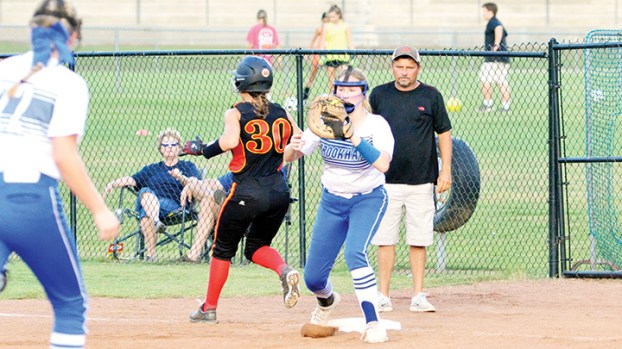 Although the Lady Cougars got off to a slow start offensively, they were able to control the game on defense until their bats could heat up, controlling the field behind great pitching. Scoring just two runs in the third inning, the Lady Cougars’ bats didn’t fully come to life until the fifth inning, when they scored four runs.

“Newton County Academy has a good senior pitcher and deserves credit for us coming out flat to start the game,” Lady Cougars coach Becky Flowers said. “We weren’t as selective as we should’ve been but we adjusted and came back strong. We got some big two-out hits that really made a difference tonight. Defensively, our pitchers are keeping us in games until our offense can catch up.”

The Lady Cougars attempted to score in the second inning when Hallie Creel hit a double, but it wouldn’t be until the third inning that Brookhaven Academy would score the game’s first run.

Jana Case led off the third inning for the Lady Cougars with a single. With one out, Madison Moak hit a single. Abby Richardson brought in both runners off single. The Lady Generals were able to limit the damage, getting the next two batters out.

Brookhaven Academy’s bats heated up in the fifth inning, as the Lady Cougars brought four runners across home plate.

Facing one out, Kaylie Burgess hit a double. Moak followed with an RBI triple. Brookhaven Academy would add to their lead, as Abeni Fuller brought two runs in on a single to left field with two outs remaining.

The Lady Cougars would finish their scoring, as Creel brought in Brookhaven’s final run of the game off a double into center field.

Newton County would erase their goose egg in the seventh inning, as they managed to get on base and bring in one run off a fielder’s choice.

The Lady Bears coasted to an easy 12-2 victory over the Lady Tigers from Crystal Springs on Aug. 21. West... read more