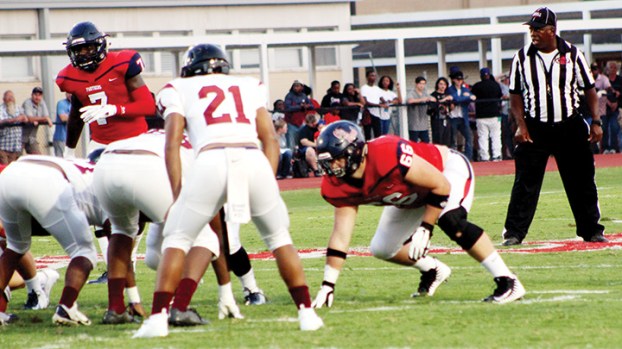 Might is Wright — BHS lineman is defensive player of the week

“I would be nothing without my teammates,” said Ole Brook senior lineman Coker Wright.

Wright will talk about himself, but he’s more comfortable talking about the group of guys that he calls his brothers.

“DJ Durr and Wesley Calcote fly around and make our defense go,” he said. “Sevante Quinn has done an amazing job as a leader and is really helping a young offensive line grow up. Kadarius Wells is going to have a ton of offers to choose from by the time he’s a senior.”

Wright could go on and on about his teammates on the Brookhaven High School football team. A team-first player, Wright has made a full-time switch to the defensive side of the ball this season after mostly playing offense as a junior.

Wright was more than the Lawrence County Cougars could handle in a 33-6 Brookhaven win on Friday at King Field. Lining up as a defensive end, he made seven tackles, one sack and caused a fumble.

For that performance, he has been selected The Daily Leader Defensive Player of the Week.

Wright played offensive tackle last season on the 11-2 Panther team and was slated to be the only returning starter on the offensive line. In the spring head coach Tucker Peavey approached Wright about moving to the other side of the ball.

Though his future as a collegiate player is on the offensive side of the ball, Wright didn’t hesitate to make the switch.

“I’m willing to do whatever my coaches ask of me, and I could see where me going to defense full-time would help the team,” he said.

If you’ve seen Wright grow up in Brookhaven — but have not laid eyes on him in the last six months — you might not recognize him. Former Brookhaven coach Tommy Clopton let Wright know that, to play Division I football, he would have to pack on the pounds.

“I stopped playing baseball, which was hard because I loved the game and loved to pitch, to focus on getting bigger and stronger for football,” Wright said. “From January to May I ate peanut butter sandwiches around the clock and drank Ensure like my life depended on it.

“My daddy says he’s going to get a raise when I go to college and he doesn’t have to feed me anymore,” he said with a laugh. Wright is the son of Ricky and Dwana Wright.

Wright currently holds 24 offers from colleges around the country. He hears from Tulane, Southern Miss, Navy, Nebraska and Mississippi State the most. The Bulldogs have not offered yet, but are keeping in close contact with Wright throughout the season.

A couple of recent phone calls with head coach Scott Frost have him excited about learning more about the Nebraska Cornhuskers. Most colleges see Wright as a center in college, a position that he works from when he is attending camps around the country. However, Tulane recently told him they’d find a spot on the defensive line for him if that’s where he wants to play.

“When you are playing defense it’s all about aggression and reading the man in front of you. I enjoy that aspect of being a defensive end,” Wright said. “I’ll play wherever they want me to in college, I’m just thankful for the opportunity.”