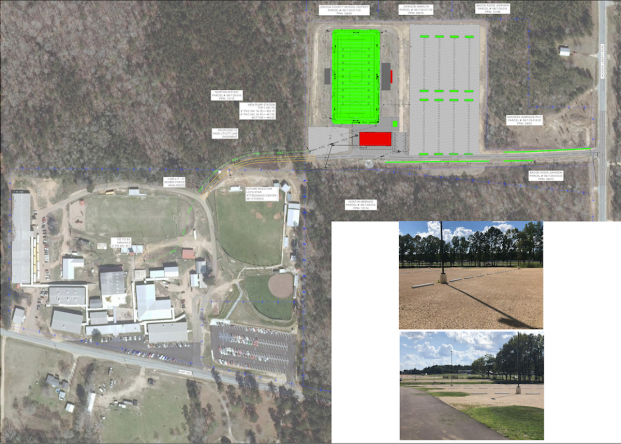 A proposed football and soccer facility for Loyd Star is detailed in this plan drawing.

The project to build a new dual-sport facility at Loyd Star has been shelved for now, but could come back in the future after a few revisions.

The Lincoln County School Board at a special-called meeting Monday afternoon voted down the Hornets’ proposed $1.9 million football and soccer complex on a vote of 3-2 after board members expressed doubts about the cost of the facility and considered construction needs at other county schools. But even the members who voted down the complex attempted to convince the crowd of around 25 county residents in attendance their opposition was situational, and that they may support the same project with some modifications.

“I want to make it perfectly clear I’m not abandoning this project,” said District 1 Trustee Kay Coon. “I have no problem voting for Loyd Star, but I do see a lot of other needs, like a special ed building at Enterprise — we have children that travel all the way across the county.”

The project called for the construction of a new playing field on a piece of land on the northeast corner of the campus on district-owned property, accompanied by a 7,500 square-foot building to house locker rooms and concession areas; a 463-slot parking lot; metal bleachers; and a concrete entrance plaza with sidewalks to the home and visitors’ sides.

The $1.9 million facility has been in the works for years — the land has already been cleared, light poles installed and grass growing in anticipation of sports next fall — but would need to follow a tight timeline in order to be ready for sports next school year, if approved.

It is meant to replace the school’s existing Sambo Smith Field, built in 1964. The field’s press box was recently condemned and electrical problems are a constant source of worry on Friday nights. With light poles installed inside the stadium, the field is not large enough to host soccer games — the Hornets’ soccer team, the first of its kind in Lincoln County, plays all its games in Brookhaven.

The new dual-sport facility would have allowed school officials to turn the existing football field into a practice area for the Loyd Star band, or to serve as the grounds for any future buildings needed at the landlocked campus.

But the board wouldn’t go for it. Members of the public were not allowed to make comments Monday afternoon, but each board member addressed the small crowd and explained their feelings on the project.

Gill in particular made passionate recommendations about construction needs around the district, drawing a little applause and establishing the vehicle by which the Loyd Star project could come back before the board — a district-wide roster of needed construction projects the board would approve and follow.

“I feel like we need to set priorities. We need a list,” Gill said. “If we can’t do it at this meeting tonight, we need to do it in September.”

Coon told the board she would only support the Loyd Star project if other members made a verbal agreement to build the next project at West Lincoln, where she said classroom space was lacking. Gill rejected the idea of exacting promises on the vote and Coon went on to oppose the project.

“West Lincoln folks have some legitimate needs. Enterprise has some needs, too,” Coon said. “I personally, if I support this, I would like a verbal commitment from the board to support West Lincoln and go out there and get what they need academically.”

Welch focused his short explanation on technicalities around the project, the biggest being the need for an easement at the corner of the two properties the district would require in order to build a campus-circling access road from Jackson-Liberty Drive to Hwy. 550, and to run a new sewage line connecting the campus to the sports facility. The district has been working with the property owner, but does not yet have the needed access.

“If we don’t get access to the land, we can’t bring the sewer in there,” Welch said. “Do we move forward with the building, or do we clear this up first?”

Before voting “yes,” Posey simply explained the district should approve the project and move on to other needs — the district is sitting on $6.7 million in a pair of construction funds, enough cash to knock out several projects across the four campuses.

The biggest appeal for support for the Loyd Star project came from Hart, who has met numerous times with planners and has shepherded the project along. He argued against suggestions to make more improvements to Sambo Smith Field and use it another season, or to downsize the project by cutting out the field house, which contains around half the project’s costs.

“If we don’t build the building, how can we use it? Do we really want to bring 1,000 or 1,500 people out there on Friday night with no water and no bathrooms?” Hart said. “I support every school we’ve got, and every project we’ve had to improve the academic structures and to improve test scores, which we need to be working on now. But no principals have requested any new academic structures. If so, hey, let’s start them — we’ve got enough money to do both.”

As superintendent, Mickey Myers does not vote with the board, but he made points in favor of the project when he opened Monday afternoon’s discussion.

“The football field is in a state of disrepair. We’re going to have to spend some money, one way or another,” he said. “Understand, academics is No. 1, but athletics is a big part of what we do in Lincoln County. We don’t all work together or worship together, but we come together and support our athletes.”

Myers said the district is planning to upgrade the football field at West Lincoln — which is too flat for proper drainage and has lighting issues — in January. Enterprise needs work on its concession stand and restrooms, and Bogue Chitto needs a new set of bleachers, he said.

“Collectively, our goal is to provide the best opportunity we can for our children,” he said.

Expo gets wild at civic center