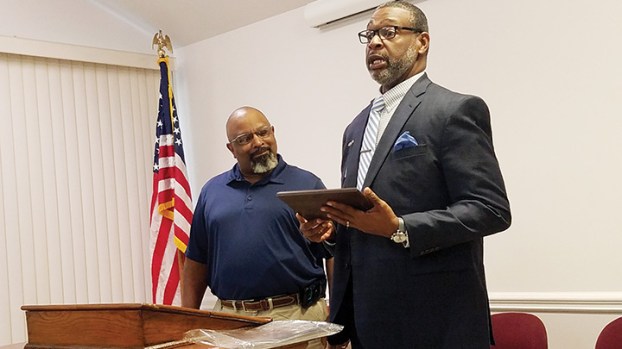 Photo by Donna Campbell/Former school resource officer David Johnson was recognized for his 23 years of service to the Brookhaven School District during the Board of Trustees’ monthly meeting Tuesday night. Pictured are, from left, Johnson and Deputy Superintendent Rod Henderson.

School board honors ‘Major’ for 23 years of service

What the former school resource officer for the Brookhaven School District didn’t know was the presentation was to him.

“They got me under false pretenses,” he said.

At the start of the meeting, Henderson presented Johnson with a plaque commending him for his 23 years of service keeping the students, staff and administration safe.

“We can’t say how much we appreciate you,” Henderson said.

Board President Willie “Doc” Harrison said Johnson made his mark on Brookhaven schools, where he started as a substitute teacher when he was also a recently-hired rookie at the Brookhaven Police Department, nearly a quarter-century ago.

“I appreciate you for having the heart that you have for Brookhaven. I don’t think there’s nobody out there that has a bigger heart for this district,” Harrison said.

Harrison was an assistant principal who talked Johnson, a 1985 graduate of Ole Brook, into becoming a sub. After a shooting at Alexander Junior High in the mid-90s that injured a student, the district decided to place school resource officers at Brookhaven High School and Alexander. Since he was a teacher and a police officer, Johnson was asked to train the SROs.

That worked for a while, but officers wanted to be on the streets of Brookhaven, not the hallways of the schools. So Johnson gave up the substitute gig and took on the challenge himself.

Johnson patrolled the schools as the district’s resource officer from 7:30 a.m. to 3:30 p.m. Monday through Friday. From 4 p.m. to midnight he was a police officer for Brookhaven PD.

He saw his family in passing, but because he lived in town he was able to take breaks for family dinners and special events.

As resource officer, he made a point of getting to know the teachers, staff and administrators, but especially the students.

Some of those who graduated while Johnson was there have careers in law enforcement because of his encouragement, he said.

That makes him proud.

He regularly passed all the courses and training needed to keep his SRO certification, but it’s the dedication to the job that helped him the most, he said.

Johnson was not just a police officer at the schools — he was a nurse, counselor and chauffeur.

“You have to be whatever these kids require of you,” he said. “If they call and say they don’t have a ride to school I would get in my car and go pick them up. I did it all. You’d have girls having boy problems. They’d come to talk to you. A lot of these kids don’t have fathers at home so you have to be a father figure.”

Johnson retired earlier this year because of health problems. He’s being treated for kidney failure and is taking dialysis at home. He’s on a transplant list and remains hopeful.

He credits his wife for being a great support system for him over the years. This was the first summer in their 14 years of marriage that they’ve had time to spend with each other.

“I couldn’t have accomplished the things I’ve accomplished without her,” he said. “She has really taken care of home while I tried to take care of Brookhaven.”

Johnson still plans to volunteer with the district, and as a parent with a third-grader at Brookhaven Elementary, he will be involved as much as he can be.

Half-million each to city, county for road work

State lawmakers on Wednesday adjourned for good in 2018, and they left the capital trailing gifts. In passing Senate Bill... read more