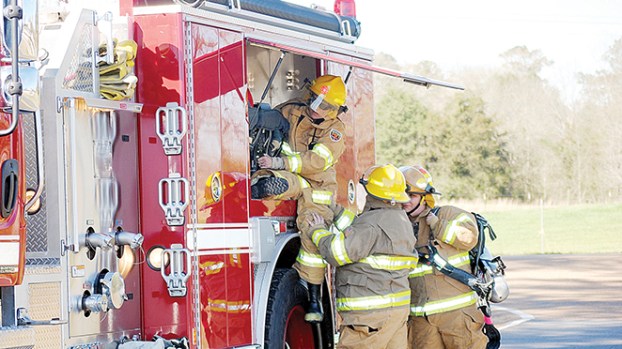 As the Lawrence County Fire District works toward a goal of a fire rating of at least an 8 in all 10 rural fire districts, departments in Sontag, Wanilla and East Central Lawrence County recently took a step closer by improving their rating to a 9.

Lawrence County Fire Coordinator Jared Evans said two of those — Sontag and East Central — could even become a Class 8 in the next year as a project to install about 85 fire hydrants in areas outside Monticello gets under way in February. Around 30 to 40 fire hydrants have already been installed throughout the county in rural areas in two previous projects, he said.

Wanilla could go to an 8, but they’ve have to purchase a truck that would meet Class 8 requirements.

“Of course, those things are expensive, so we have to do a little bit at a time,” Evans said.

Insurance companies use fire ratings to set their premiums. People in those areas could see a 10 percent reduction in insurance costs, Evans said.

Evans would like to see the districts, which include departments in Monticello, New Hebron and Silver Creek, all be at an 8 or lower.

“That’s what you aspire to be,” he said.

But at this time, the closest any department has come to perfection is a Class 2 rating, which is claimed by Gulfport Fire Department, he said.

Evans said he is currently working to get easements needed from property owners to begin installing fire hydrants. The project will be paid for through a cap loan of $350,000.

“It will be paid for with county funds over a 10-year period,” he said. “It will not result in a tax increase.”

Evans said the hydrants will be a big improvement over the current method, which is to shuttle water that’s needed to fight fires.

The recommendation from the MSRB is to place hydrants no more than 1,000 feet apart.

“Right now, on the money we have, that’s not attainable. I’m trying to get them as close together as possible,” he said. “My goal is most people in Lawrence County will be within a mile and a half one way from a hydrant. Right now, they could be five or six miles from water. So that would be a huge difference.”

Evans said getting water to put out fires to save people and property is the main priority for firefighters.

“If we had the same lines out in the rural areas that they have in downtown Brookhaven we’d be looking at immediately a better rating than a class 8,” he said. “Water’s always going to be our Achilles heel. Hydrants make it a little easier.”

Evans said the Sontag, Wanilla and East Central Lawrence County districts encompass much larger areas than the names imply. For instance, in addition to the area commonly called Sontag, the Sontag grading district reaches as far south as Nola Road to a mile or so down Foster Road to just shy of Cub Brown Road as well as Tom Evans, Rankin and George Bennett roads. The Sontag district also reaches northwest to Tyrus and the Mt. Zion community and northward on Ras Case Road to Bahala Creek Bridge.

The Wanilla District, in addition to areas commonly referred to as Wanilla, also includes all of Cub Brown Road, Steen Smith Road and the Friendship community and N.A Sandifer Highway to the Pearl River Bridge.

The East Central Fire Grading District encompasses all areas within Lawrence County within five miles of Silver Creek with one exception due to a lack of water lines, he said.