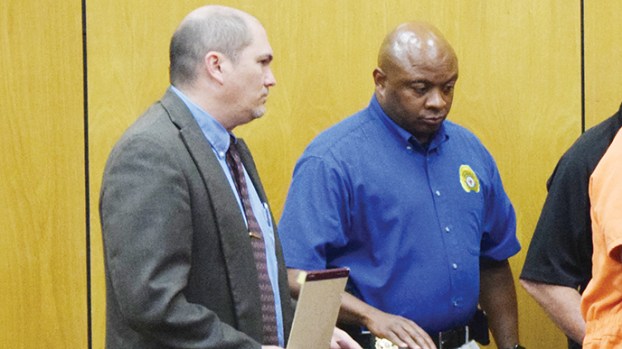 Photo by Adam Northam/Jason Tate, left, is one of only three public defenders in Lincoln County. The others are Lesa Baker and Jason Barrett.

When court is in session, Lincoln County public defenders and their clients meet in a small office in the hallway behind the courtroom.

It used to be a witness room, 8-foot-by-8-foot, no windows, a tight fit for two people, though it does have its own restroom. The county provided the desk, and the circuit clerk donated a spare computer from the inventory, but head public defender Lesa Baker bought the bookshelf, the printer and painted the room on her own dime, a kind of Persian green, the color of calm and good luck.

“In all honesty, it was some leftover paint I brought from my house,” Baker said. “I had to do something to liven it up. But, it’s nice to have this office where we can shut the door and talk to our clients while court is in session. Before this, we just had to meet in the hallway.”

The county’s three public defenders are fortunate they have an office in the courthouse at all.

While the State of Mississippi divvies up millions of dollars to help pay the salaries, travel and office expenses for the state’s 22 district attorneys and their staffs, local public defenders receive no state or federal money — they are part-time employees, with no operating budget, splitting $157,772 in local funding appropriated each year by the Lincoln County Board of Supervisors for salaries. They use the staff and resources of their own private law offices, pay for their own continuing education and certifications, and file motions to the court when they need extra manpower on a case.

The three of them — Baker, Jason Barrett and Jason Tate — are handling an ever-increasing case load of violent crimes and drug offenses, appointed by judges to take up the defense of the indigent who can’t afford private attorneys. They work in justice court and city court, where charges are formalized; in youth court, where families are broken apart or mended; and in circuit court, where freedom and lives are won and lost.

And they’re almost out of time for the new cases coming in. At stake is sufficient legal representation for the poor, who depend on public defenders to guide them through the criminal justice system.

“It’s getting more and more time-consuming. To adequately represent defendants, especially in violent crime, it takes a lot of preparation,” Baker said. “In Lincoln County, with the three attorneys we have, we have done a very good job working our case load. But with the increase in violence and the potential sentences, that’s where we’re going to fall short if we can’t get some extra resources.”

The public defenders represented 182 clients in circuit court in 2017 and have close to 100 active cases right now, with more coming in every time the grand jury wraps up an every-other-month session with new indictments issued. Those bodies handed out 204 indictments in 2015, 286 in 2016, 310 in 2017 and 142 as of July 1 this year. Not every indictment is processed into court, where public defenders are assigned to cases, in the same year it is issued.

On top of that, public defenders are assigned to represent indigent clients at first appearances in justice court and city court — though city court has begun using Barrett almost exclusively and paying him with city funds — and they are appointed to represent children in delinquency, abuse and neglect cases in youth court.

The nature of the cases is shifting, too. Baker said more and more cases in Lincoln County involve co-defendants, or defendants who are witnesses in other, active cases. Public defenders can’t take on the latter, and can only represent one each of the former — the court has to call in other attorneys in both instances.

New pretrial rules handed down by the Mississippi Supreme Court to ensure fair treatment of the accused may also threaten the public defender system. The new guidelines require an attorney to be present at initial appearances, which must be held within 48 hours of an arrest, meaning the three attorneys could be forced into a nearly unending on-call rotation of appearances.

Baker is afraid that rotation could lead to her attorneys giving up the public job altogether and retreating back to their law offices for private work.

“I don’t want to lose an attorney by telling them they have to be there all the time,” she said.

One of them is already stretched thin for the coming months — Tate is representing accused murderer Willie Corey Godbolt, assisting state public defender Alison Steiner. Baker and Barrett are taking on more assigned cases to leave Tate time to work on what could be the biggest trial in county history, but the case will cause him to miss work at his firm.

“There should be additional compensation for that,” Baker said. “They expect us to keep up a private office, and that office is what allows us to be public defenders.”

Baker, 53, has been a public defender since 2000 and is closing in on retirement. She wants the office set right before she goes, and she plans to ask the board of supervisors sometime next year for additional funding to bring on a fourth attorney.

There’s a larger effort ongoing in Mississippi that would give Baker’s office more than just another lawyer.

Under the proposed system, existing public defender offices would report to the council and a new group of 22 district defenders would be chosen by local selection committees and serve as state employees. County supervisors would then enter into agreements with the district defenders to place public defenders in the office, and each office would run on objective standards set by the oversight council.

“The task force members agreed that shifting the primary funding of indigent defense from the counties to the state — as we do with prosecution — was the best way, but this is a compromise overall as well as in its parts,” said state public defender Andre de Gruy. “The bottom line is time and resources.”

The task force laid down seven guiding principals for indigent defense, including fair compensation for defenders and workload limits; merit-based selection of chief defenders; participation from the private bar; screening clients for eligibility; and the consideration of experience and existing workload before assigning public defenders to a case.

“Assessing caseloads for attorneys is essential to ensuring clients receive effective representation,” de Gruy said. “There is such a variance from the amount of work needed on a murder case as opposed to a shoplifting case, you can’t just look at a case count. Mississippi needs a state-level entity with the authority to set objective standards that would include what is a case and how much should that type of case ‘weigh.’”

The changes have been recommended, but not yet implemented. In Mississippi, reform comes slow.

The task force’s final recommendations were not touched by lawmakers this year — a pair of bills to extend the task force beyond its June 30 deadline died in committee, the third time it has been allowed to sunset.

And even that can sometimes take a while to fund.

“Our DA’s office is not that huge — probably one of the smallest in the state — and we really had to fight to get a second assistant DA slot,” said Mississippi Democratic Party Chairman Bobby Moak, a former 30-year lawmaker.

Moak, a Bogue Chitto attorney who does some criminal defense work, said expansion of the DA’s office took some maneuvering, and an assistant’s position was added only when grant funds came available, with the job eventually shifting to a full-time position.

The office currently has two assistants for Lincoln County, two for Pike County and one for Walthall County, as well as two investigators, two paralegals, two victim assistance coordinators and other staff.

Moak said some method of finding more support for public defenders should be developed, whether it be straight funding from the Legislature, a fine system or other means.

“It’s politically easier to be for law and order than it is to see tax dollars go to defend someone who has been charged with a crime,” he said. “Certainly I think our guys in Lincoln and Pike county do a really good job with the number of cases they have, but they are to the max. I have nowhere near the number of cases these guys have, and I can tell you my office — with two personnel assigned to criminal cases — spends a lot of their days dealing with phone calls, family, discovery issues, hearings at the court house, drafting petitions. Public defenders don’t have a staff to do that for them, it’s just them. I wouldn’t want their job.”

No new candidates for the Lincoln County School Board qualified this week, and there are just four more business days... read more