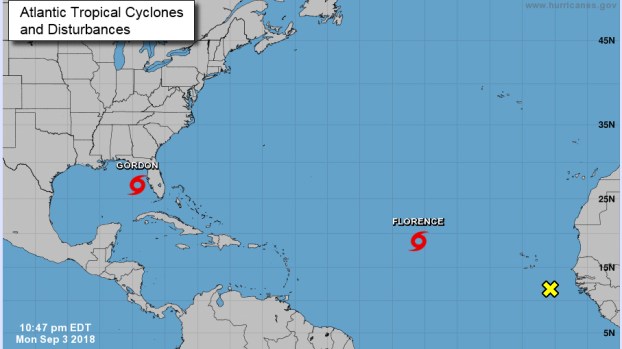 Tropical Storm Gordon formed Monday off the southern tip of Florida and is headed toward Mississippi.

Lincoln County Emergency Management Director Clifford Galey said the storm is expected to make landfall somewhere on the Mississippi coast late tonight, and reach Lincoln County early Wednesday morning with sustained winds of 20-25 mph, and gusts reaching as high as 40 mph. The storm could intensify as it crosses the warm waters of the Gulf of Mexico, he said.

“It does have the potential to turn into a Category 1 hurricane,” Galey said. “We’re going to be on the northeast side of the storm, according to the track right now, and that’s not the good side.”

Galey said Gordon could bring up to three inches of rain to the area, already saturated by recent rains. The heavy rains and steady wind could fell trees across the region and put homes in the dark.

“Our main concern is going to be power. It don’t take much to knock the old trees down this time of year,” he said. “We’ll probably wind up with some tornado watches and warnings.”

Galey advised everyone to remain weather-aware and make preparations now.

“It seems to be a minor storm, but it doesn’t take much to knock the trees down and turn the lights out,” he said.

Hurricane watches are in place along the Gulf Coast from New Orleans to Mobile, and tropical storm warnings are in effect for the same area. A storm surge warning has been issued down the length of the Mississippi coast, and Galey said sandbag distribution points have been opened there.

The 2018 Hurricane Season has been mercifully quiet so far, with Gordon being only the seventh named storm of the year. Only Subtropical Storm Alberto has affected the region, moving up the western border of Alabama in late May.

Two hurricanes and two other tropical storms have wandered out into the Atlantic Ocean without making landfall in America, and Tropical Storm Florence is currently out in the middle of those waters, 500 miles beyond the Cape Verde Islands and headed toward Bermuda.

The season has been slack because of cooler-than-normal ocean temperatures in the hurricane formation zone off the coast of western Africa and dry air blowing out over the ocean from the Sahara Desert. Scientists estimate ocean water must be around 80 degrees, down to a depth of around 150 feet, to produce and sustain hurricanes, but temperatures in the zone this summer have stayed in the mid- to high-70s.

The Gulf of Mexico, however, is plenty warm enough to feed hurricanes, with temperatures in the mid-80s as of Sept. 3.