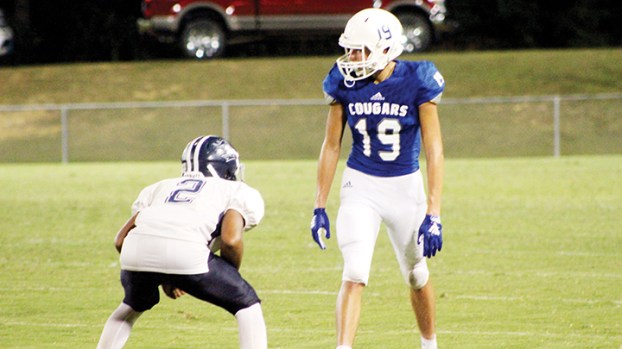 When Ron Rushing says that phrase, he’s talking about the players from the 2016 team, his first at Brookhaven Academy.

Senior wide receiver Cade Brown is proud to be a ’16 guy. On Friday against Clinton Christian, Brown caught six passes for 144 yards and three touchdowns, and for that performance he has been named The Daily Leader Offensive Player of the Week.

Being a ’16  guy means you survived a season that saw Brookhaven Academy start the year with 17 players on the roster. As injuries mounted, the Cougars were forced to forfeit their final two games of the season due to player safety concerns.

After the win against Clinton Christian in a game that saw BA take a 28-0 lead at halftime, Rushing asked his players from 2016 if they remember one of their main goals that season.

You can hear the pride in Brown’s voice when he talks about being part of that team as a sophomore.

“I had to play every down,” said Brown. “Coach Rushing says he knows you’re tough if you were on that team because when you got hurt, you couldn’t stay down, you had to get up because there was no one else to come in for you.”

Brown’s father, Winky, has a successful tree-trimming and stump-grinding business that his sons assist him with in the summer. Cade does not plan to follow in his father’s career footsteps.

“It’s hard work, being on the ground and picking up the limbs,” said Brown. “Sometimes my daddy will be working around power lines and it makes me nervous, no way I could do that.”

If you’ve ever seen Winky Brown hanging out of a bucket, 60 feet in the air, and wielding a chainsaw, then you know where his son gets his athletic ability.

The Brown family as a whole has their fingerprints all over the history of Brookhaven Academy athletics. Winky Brown was on the first state championship baseball team at the school and played basketball, as did his brother Blake.

Cade’s uncle Joey was a standout athlete who excelled at football, and his aunts — Brenda and Nay — were basketball players. Brown has seen his older brother, Caleb, play football for the Cougars, along with his cousin, Cody Thornhill. He knows that his younger cousins, Ainsley and Braxton Orr, will also suit up for the Cougars one day.

Brown is also a standout basketball player and was an integral part of the Cougars’ state championship in that sport last season. He loves bringing the crowd to their feet with a dunk, but he says scoring a touchdown is a bigger thrill.

“I just love the rush that comes from scoring touchdowns, there is nothing like it,” said Brown.

As a junior, he caught 67 passes for 1,103 yards and 12 touchdowns. At 6-foot-2 with long arms and athletic ability, he knows opportunities to play college football will be available next season. It’s not something the laid-back Brown is worried about, though.

“I’m just letting it play out,” said Brown. “Coach Rushing has talked to some schools about me, but I’m really just focused on enjoying this last year of high school ball and doing whatever it takes to help my team win.”

The football belongs to Colton Newman

Football coaches preach to their players they should stick with the program. Come to the summer workouts, focus in the... read more