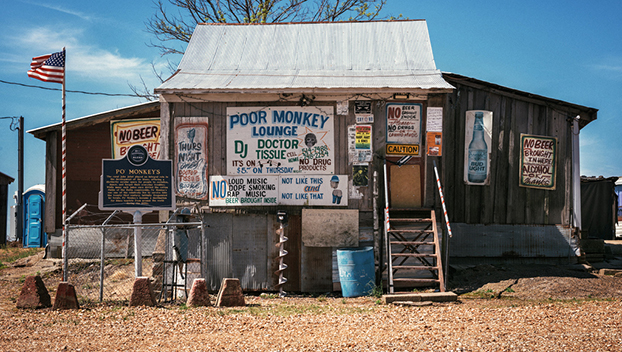 MERIGOLD, Miss. (AP) — First Po’ Monkey died. Now, the stuff that surrounded him could be going away too.

The contents of an iconic Mississippi Delta juke joint will be sold at auction Oct. 1, calling into question its future as a tourist attraction.

The Mississippi Business Journal reports that the heirs of Willie “Po’ Monkey” Seaberry, who died in 2016, have decided to sell the furnishings, including things like the exterior signs.

The former sharecropper’s shack turned juke joint has been closed since Seaberry’s death. The building itself belongs to Park Hiter, a Bolivar County landowner who says he’s undecided about its future.

Merigold officials have sought to move the house into town. Merigold launched the Monkey Days Festival last year, keyed to the July anniversary of Seaberry’s death.

Family members will retain rights to the Po’ Monkey name and image, seeking to license them for money. Family members had earlier said they hoped to reopen the bar.

Seaberry lived in the shack for decades while driving a tractor on the Hiter plantation and launched Po’ Monkey’s as a Thursday night house party. Its local reputation later went global as one of the state’s last rural juke joints, boosted by Mississippi’s promotion of blues heritage for tourists.

Lawyer Daniel Morris says interest in the sale is widespread. Potential bidders from Japan, Ireland, the East Coast, San Francisco and Austin have inquired about the sale.

“One group wanted to buy it and donate it to the African-American Museum in Washington, D.C.,” Morris said.