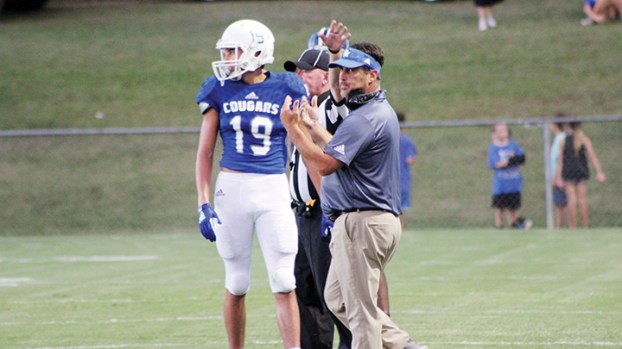 The Brookhaven Academy Cougars (2-0) will face a much-improved Sylva-Bay team on Friday when they host the Saints for a 7 p.m. kickoff on R.M. “Red” Stuard Field.

Last season the Cougars won a close game — 28-25 — over a Sylva-Bay team that would finish 3-8. This season the Saints are 3-0, and Cougars’ head coach Ron Rushing says they are a well-coached opponent.

“Coach Terry Underwood is in his second year as their head coach and they’ve picked up some kids that are playing for the first time along with some transfers,” said Rushing. “They’ve got wins over some good teams and they’re playing good ball.”

Underwood was once the head coach at East Central Community College in Decatur. He has also served as defensive coordinator at Oak Grove under former Warrior head coach Nevill Barr.

The Saints are coming off of a 46-14 win over their rivals, the Newton County Academy Generals. Sylva-Bay led 28-14 at halftime.

In their season opener the Saints beat Tri-County Academy 17-14, and then followed up with a 6-0 victory over Winston Academy.

When Rushing looks at Sylva-Bay on film, he sees an athletic quarterback that must be contained.

“They’ve got a kid under center that can run the ball really well — he kind of keys everything they do,” said Rushing. “He throws a good ball off the scramble and that’s something we’ll have to be disciplined to stop.”

Sylva-Bay quarterback Philip Anderson had two long touchdown passes last week — one for 67 yards and another for 52 yards — in the win over Newton County. Both of Anderson’s long scoring throws went to receiver River Thomas.

The Brookhaven Academy defense only gave up one score last week to Clinton Christian in a 38-8 win over the Warriors. The Cougar linebacking core of Gunar Brister, Collin Waldrop and Cole Griffin are a strength of the defense. Brister led the team with 11 tackles against Clinton and Griffin made eight stops himself.

The game will be the annual “Pink Game” that sees the school honor the lives of those affected by cancer. The team will wear special pink jerseys and, in a pregame ceremony, the seniors will acknowledge a friend or loved one who has been diagnosed with the disease.

“It’s a tradition that we started when I was at Cathedral and I think they are in year seven of having the game over there,” said Rushing. “Cancer is something that impacts all of us and our guys take it very seriously as a way to honor those who have dealt with the disease.”

The pregame ceremony honoring those impacted by cancer will precede the game at 6:35 p.m.

Their coach calls them the “’16 guys.” When Ron Rushing says that phrase, he’s talking about the players from the... read more