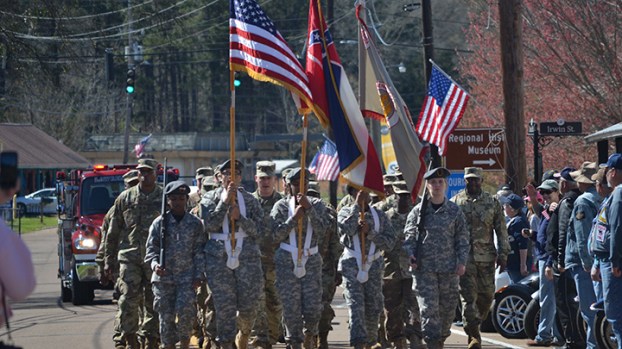 Photo by Donna Campbell/Troops with the 155th Armored Brigade Combat Team were honored with a sendoff ceremony and parade in Monticello.

A statewide effort is underway to make sure troops from the 155th Armored Brigade Combat Team — which includes National Guard members from Brookhaven and Monticello — will receive care packages to show them they are not forgotten.

“There are over 4,000 soldiers currently deployed from Mississippi,” she said. “They are asking for monetary donations to help with the postage as well as supplies for the care packages.”

The 155th ABCT, which is headquartered in Tupelo, began a nine-month deployment to the Middle East in June in support of Operation Spartan Shield, said Lt. Terry Hill with the communications office.

At least 30 soldiers from the Brookhaven and Monticello units are currently participating in Exercise Bright Star in 18, which is a multilateral U.S. Central Command command-post exercise, field training exercise and senior leader seminar held with the Arab Republic of Egypt and other partner nations.

Tupelo American Legion Commander Mike Pettigrew said the goal is to get the packages delivered by Nov. 11 — Veterans Day.

Pettigrew, who was on active duty for 28 years and was deployed to Iraq and Afghanistan, said reminders of home were always welcome. The care packages let the troops know they’re remembered, he said.

“We just want to make sure we do something significant for them,” he said.

While wish list items are needed, funds for postage is a top priority, Pettigrew said. Initially, $70,000 was needed for postage to ship the boxes to an air base in New Jersey. From there, the packages will be loaded on a military plane to Kuwait. That part of the trek is in the hands of the members of the state’s congressional delegation, he said.

However, the Tupelo post is working with a non-profit and will be able to get by spending about $40,000 for postage.

Monetary donations can be made at www.gofundme.com/operation-mississippi-gratitude. Checks can also be sent to American Legion Post 49, 1875 Legion Lake Road, Tupelo, MS 38804.

Any leftover funds will be used for Family Readiness Group programs to serve families waiting for their soldiers to return, Pettigrew said.

For more information about the Family Readiness Group for India Co. 106, contact Byrne by email at loriree08@yahoo.com.

‘Night’ at museum is Thursday

The late Tom Moak and his brother, the late Joe Moak, will be telling entertaining stories about growing up in... read more