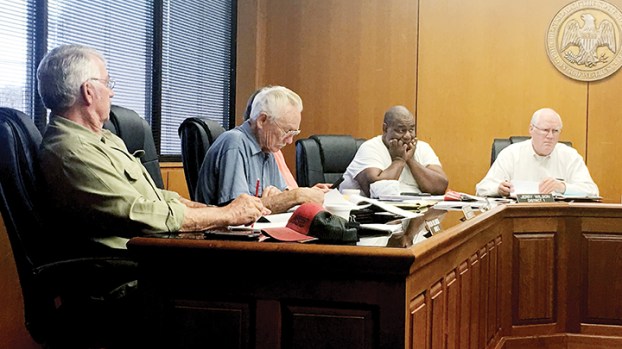 Profits for Waste Pro in Lincoln County are going to end up in the red.

The Lincoln County Board of Supervisors on Monday formally adopted the fee system it will use to dock payments from the embattled garbage company’s final two paychecks for August and September before its contract ends for good on Oct. 1. Supervisors are still submitting their expenses from playing cleanup behind the company’s missed trash pickups, and already the total has eclipsed roughly half what Waste Pro earns in a month.

“Just playing with the numbers, we’ve calculated about $42,000 of costs so far,” said Lincoln County Administrator David Fields. “We’re still getting the numbers firmed up.”

Supervisors voted 5-0 to enact the fee scale, which they’ve been developing and threatening to implement for months after having to pull crews off road and bridge jobs and send them house-to-house to grab missed garbage countywide. Fields met with board attorney Bob Allen and county engineer Ryan Holmes to come up with a fair and measurable way to chip at Waste Pro’s wallet.

They settled on common rates for equipment and manpower the Federal Emergency Management Agency uses to reimburse small governments working during declared disasters, determining a crew of two workers hitting the road on garbage detail for eight hours in a dump truck would cost a supervisor $857.72. But some supervisors have sent out multiple crews, or bigger crews, using more equipment.

And they’ve run behind Waste Pro picking up garbage for far more than eight hours.

Fields used records turned in by District 5 Supervisor Doug Falvey as an example — Falvey’s recent garbage routes had used up $2,972 in labor and $3,889 in equipment, meaning the county will slice nearly $7,000 off one of Waste Pro’s two remaining payments, which are around $90,000 each. Those are only some of Falvey’s expenses, and every supervisor has similar numbers and three more weeks of likely collecting to go.

Waste Pro began missing pickups earlier this year, and supervisors responded with a missed trash collection hotline in the county tax office to keep count. The board hired Arrow Disposal Service Inc. in early July on a new three-year contract that begins Oct. 1, and Waste Pro’s service has collapsed since, with its employees dropping off in search of new jobs before the contract ends.

Waste Pro Regional VP Randy Waterlander came before the board on July 30 and promised the company would bring in more trucks and manpower from regional offices to make sure service was restored in Lincoln County before the contract ended.

“We need to add one more fee in there — for lying,” Falvey said. “We were told they were going to bring some more trucks and men here to get right, and they didn’t do it. They have not done their jobs.”

Even Allen, who normally calms down supervisors when they get fired up and say things like threatening to sue the governor, declined a suggestion to contact Waste Pro and give them warning.

“I can’t get anyone to return a call at Waste Pro, so I’m not gonna call again to see if they’ll agree with how we’re going to deduct them,” he said.

Supervisors asked Fields to include the cost of trash bins some of them have set out at county barns or across their districts, and for cleanup around the temporary dump sites.

“It’s like sitting down at a restaurant, paying for a meal and not getting fed,” he said.

Owner of burned house: ‘I have nowhere to go home to’

Sept. 4 was not a very good day for Jon Hutcherson. The forklift operator for Rex Lumber thought he was... read more