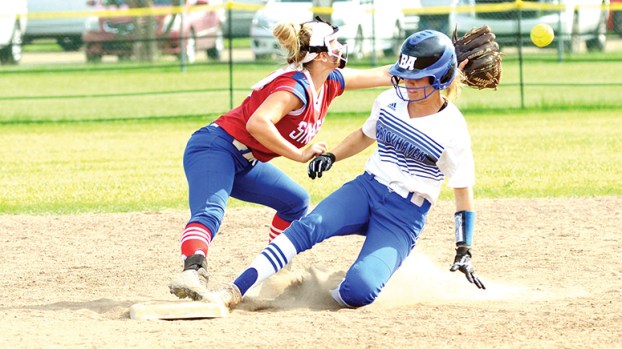 Photo by Dave Linton BA’s Jana Case slides safely into base Saturday in game two, against Simpson, in a three-game tournament at Hansel King Sports Complex.

The Brookhaven Academy Lady Cougars pushed their perfect record to 23-0 on Saturday with a three-win day at their annual tournament at the Hansel King Sports Complex.

The Lady Cougars knocked off Jackson Prep 2-1 in game one, squeezed by Simpson 2-1 in game two and crushed Centerville 14-1 in their finale.

In the win over Jackson Prep, the Lady Cougars and Patriots were locked in a pitching duel and both teams finished the game with five hits apiece.

“We were a little rusty, but we did have a long layoff since our last game due to the weather,” said Lady Cougars coach Becky Flowers.

With the game scoreless heading into the second inning, Jackson Prep threatened to blow it open as they loaded up the bases with one out. But the Lady Cougars’ defense stood strong as they stranded the runners on a popup and a ground out.

Brookhaven Academy would be the first on the board, as they brought two runs across the plate in the third inning. Kaylie Burgess got the inning started with a one-out single and Madison Moak followed with a single of her own. Stealing third base, Burgess set up the Lady Cougars with a chance to score the game’s first run.

Brookhaven Academy would get their first run as Burgess was able to steal home plate.

The Lady Cougars scored their final run of the game as Abby Richardson nailed a ground-rule RBI double into center field.

Jackson Prep attempted a rally in the fourth, but could only come up with one run, which came off a leadoff home run.

Emily Claire Felder started on the mound for the Lady Cougars, going three innings while giving up two hits and picking up three strikeouts.

The win over Simpson was also a tight one, as runs again came at a premium. Both teams posted six hits apiece in the contest.

“We came in today playing against two softball programs that are historically very good,” said Flowers. “Jackson Prep and Simpson Academy are both defending state champions. Winning both games 2-1 was kind of emotional, and physically draining. I thought the girls handled it pretty well.”

Brookhaven Academy struck first as they scored their only two runs in the first inning.

Moak got the bottom of the first started with a single into left field. Richardson worked the count and drew a walk. Madi Smith was able to reach first on an error by Simpson Academy, loading up the bases.

Brookhaven Academy got their first run of the game off an RBI sacrifice fly by Abeni Fuller and their final run off an RBI single by Hallie Creel.

BA attempted to add more to their total as they loaded up the bases in the second inning with two outs, but Simpson was able to strand the runners.

Simpson Academy found the scoreboard in the third inning off a two-out RBI single by Abigail Carter.

Neither team was able to come up with much offense, as both pitchers dominated the remainder of the game.

Felder was the winning pitcher for BA after going two and two-thirds innings, allowing one run on four hits and striking out four. Madi Smith threw three and one-third innings in relief out of the bullpen while allowing two hits, striking out two.

Moak led BA at the plate, going a perfect three-for-three with three singles. Richardson had a single. Jana Case hit a double.

“Our pitching is doing a good job at keeping us in the games after just giving up only one run in all three games today,” said Flowers. “If they keep doing that, it’s going to be hard to beat us. At the end of the day we had a great day of softball. Everyone came out and supported us big.”

Brookhaven scored their first run of the contest as Creel delivered a bases-loaded RBI single. The Lady Cougars would score one more run before the Lady Tigers were able to get out of the inning.

The Lady Tigers pulled within one run in their half of the first, the closest they would ever come to the Lady Cougars, off a one-out home run.

The Brookhaven offensive explosion started in the second with a walk by Case. Burgess followed with a single and a walk by Moak then loaded the bases.

The Lady Cougars scored their first run of ten when Richardson drew a walk. The runs kept coming, as Madi Smith brought in two runs off a single. Fuller and Creel followed with back-to-back RBI singles.

Marie Clanton continued the Lady Cougars’ scoring, nocking in an RBI single. With two outs and the bases loaded, Richardson finished the scoring with a bases-clearing double.

Morgan Smith brought in the Lady Cougars’ final two runs of the game in the third inning off a two-run RBI single.

Madi Smith was the winning pitcher after going three innings, allowing two hits and one run and striking out three.

The Lady Cougars will be back in action tonight as they host Clinton Christian. Junior varsity starts at 5 p.m. with varsity slated for 6:15 p.m.

There’s nothing sweeter than a homecoming win

The cliché is as old as the hills, but it still holds grains of truth. Winning cures all. Bogue Chitto... read more