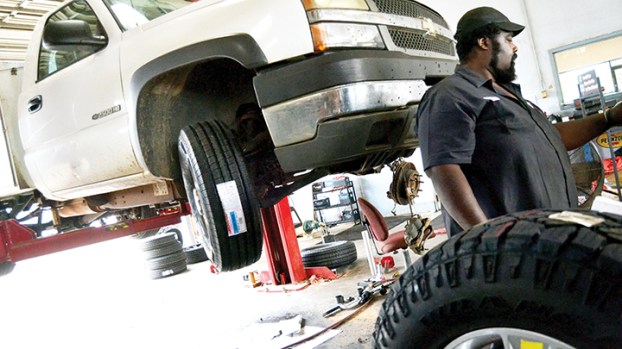 Photo by Donna Campbell Kelvin Randle, a service technician at the Brookway Boulevard location of Bozeman Tires, balances a new tire before putting it on a customer’s truck.

Bozeman’s customers can get tired in the city

Gene Brown sold the business — one of seven he owned — to Bozeman in late July.

“We didn’t buy Gene’s Tire, we just bought the building and the property,” Bozeman said, from his office at the original shop at the intersection of Hwy. 84 and Auburn Drive. “He locked up one day and I opened up the next.”

Brown, who is in his 70s, approached Bozeman a year or two ago about buying it and when the price was finally right, Bozeman agreed, adding to his tire empire and eliminating a competitor.

Bozeman, who owns Hwy. 84 Chevron with his sisters, wanted to offer more options for his customers. With just two racks at the Bogue Chitto location, mechanics were limited to jobs that didn’t take more than two hours. The Brookhaven shop came with nine racks.

Bozeman hopes to keep them full.

“We have a lot of people call out here and they’re excited we’re on Brookway because it’s more convenient for them to go up there than to drive way out here,” he said.

His wife, Lynn, has been busy spiffing up the store, adding a new wood floor, new counters and a technology center with a charging area for cell phones and laptops for customers’ convenience. A media area will include a large screen TV, which will show clips from a variety of shows, he said.

The Brookway store will be more appealing to female customers.

“They’ll feel more welcome when they come in there,” he said. “There are several places within walking distance while you leave your car to get it worked on.”

The Bozemans want to improve their customers’ experience.

“We just want to offer our old customers and our new customers more services than we have in the past,” he said.

Bozeman took over the store on Auburn Drive and turned it into the first Bozeman Tires in 2006, but his experience with tires started decades earlier when he worked with his brother, Steve, in their hometown of Hazlehurst.

“I kind of learned it from my brother years ago back in the early 80s.”

Bozeman moved to Lincoln County in 1992.

His son, Jeffrey, works for him full-time, and one of the other three children works when he wants to.

“We try to treat everybody fair and give them honest answers to their questions and treat them how we’d want to be treated,” he said.

Mission is healing in Lincoln County

Volunteers with Mission Mississippi’s local chapter hope by sharing a documentary about slavery’s impact on America, it will lead to... read more