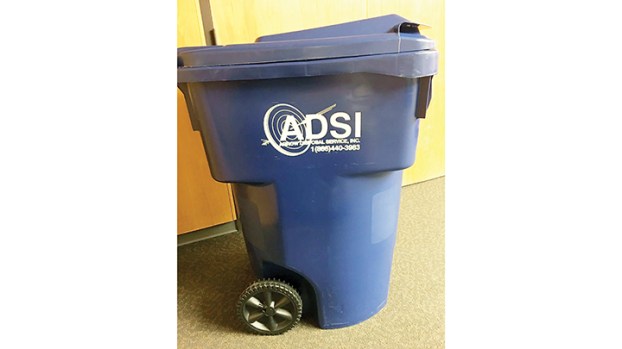 When will ADSI trash cans be delivered?

Q: When will we start getting replacement trash cans in Brookhaven for the new garbage company?

A: On city garbage routes, it’s out with the old and in with the blue.

Arrow Disposal Services Inc. will take over the city and county’s garbage contract from Waste Pro Oct. 1. Blue 95-gallon rolling carts will be delivered to customers in the city starting Monday. The carts are printed with the company’s logo and initials, ADSI, on the sides.

“There will be a sticker on each cart that tells the resident what day the pickup is and the time to put it out,” said Jimmie Moore, vice president of governmental and public affairs for ADSI. A toll-free number that rings at ADSI will be listed on the sticker.

While customers in the county will continue with once-a-week pickup, Brookhaven is dropping from two times a week to just once a week. Moore doesn’t anticipate this change causing problems for customers.

“I feel like most residences, a 95-gallon cart once a week is sufficient,” he said. “I don’t think once-a-week is going to be a tremendously big issue.”

Recycling will be on Mondays for the entire city, he said. Customers will use the recycle bins they’ve already been using.

The 95-gallon carts belong to ADSI and they’re responsible for the maintenance. Additional carts will be available for a fee, he said.

Moore said ADSI will try to maintain the existing routes in the county, but there may be some changes in the routes in the city because of the once-a-week pickup. The best suggestion for those on city routes is to put their can out by 6:30 a.m. on the day noted on the sticker on their cart, he said.

Though Lincoln County also chose ADSI for garbage pickup, supervisors opted to continue without adding carts to the contract.

The Town of Wesson has a little less than $600,000 to operate for the next fiscal year after aldermen approved... read more