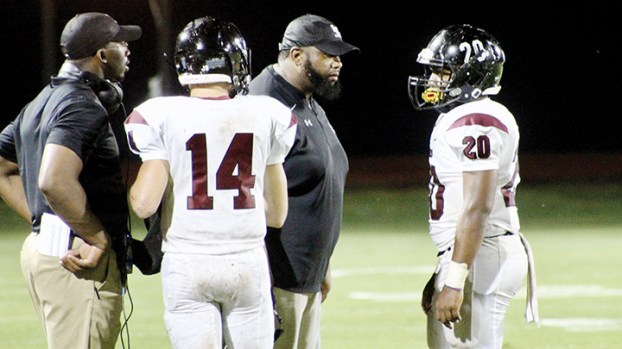 Photo by Cliff Furr/Jesse Anderson gives instruction to No. 20 Tae Cole in their season opener.

Even though the Bulldogs (0-4) are not the juggernaut they once were, Lawrence County (3-1) coach Jesse Anderson expects to get their best shot.

“Franklin County is a program with a lot of pride and they always play us very tough,” said Anderson. “They’ve got some really good size and they’ve played some good teams. I think they’re a dangerous team and we’ve been stressing that to our kids.”

Franklin County has not posted a winning season since their last season under Anthony Hart when they finished 8-5 in 2015. Last season the Bulldogs finished 1-10. Lawrence County beat Franklin County 19-16 in two overtimes in 2017.

Franklin County lost their season opener to South Pike and then lost to Seminary and North Pike. In those week two and three losses the Bulldogs gave up 55 and 54 points in each respective game. Last week Franklin County dropped a home game 33-24 to one of the top 1A teams in the state, Lumberton.

Anderson hopes that his team’s rushing attack will wear down the Bulldogs. Last week in a 20-7 win over Bay High, the Cougars attempted three passes in the first half. In the second half they attempted zero throws as their running game ground the Tigers down.

Lawrence County has four ball carries with over 130 yards rushing this season, led by junior speedster Kylan Cooper who has a team-high 51 carries for 428 yards and a team high five touchdowns.

“I probably got hard-headed in my play calling last week and should have tried to throw the ball, but there came a time when their defense got tired of trying to tackle us,” said Anderson. “As a running team that’s what you want to see. You love to see your guys impose their will.”

Kickoff is set for 7 p.m. at Lawrence County High School.

For the second consecutive week the West Lincoln Bears (2-2) will host a powerful program from Rankin County when the... read more