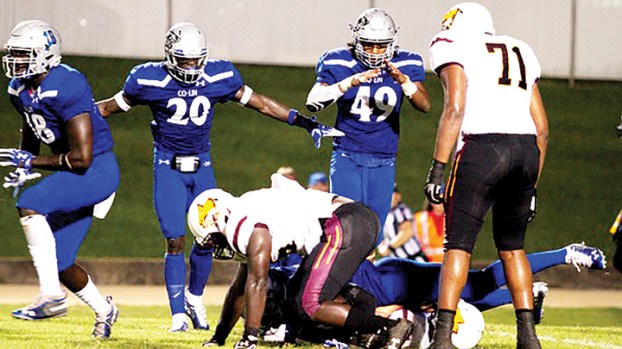 The Copiah-Lincoln Community College Wolves could not be stopped Thursday night as the team scored on six of their first seven offensive possessions.

The Wolves racked up 419 total yards and 49 points against their South Division foe, Pearl River Community College. The 49-0 win moves the Wolves to 2-1 on the year and gives them a 1-0 record in division play. The Wildcats fall to 0-3, 0-1. The win gives Co-Lin a lot of momentum going into next week’s home matchup with the No. 5 Northwest Rangers. The game will be in Stone Stadium on Co-Lin’s Wesson campus Sept. 20 at 7 p.m.

Later in the first quarter Rico Owens capitalized on good field position and broke a 33-yard touchdown, and on the Wolves’ next possession Davis connected with DeMartre Collins for a 10-yard touchdown. The scores stretched Co-Lin’s lead to 21-0 with 6:40 left in the first.

The offensive production continued for the Co-Lin into the second quarter. Connor Mire got some reps at quarterback, and with the help of running back JJ Jernighan, took the Wolves 80 yards to pull the game to 28-0. Mire capped off the drive with an excellent throw to Taylor for a 24-yard score.

Pearl River got the ball moving on the ensuing possession, but the Wolves showed grit on the defensive side and forced a turnover on downs in Co-Lin’s red zone. The stop ignited Co-Lin’s offense once again. Co-Lin took the ball 89-yards on just seven plays to the house. Mire connected with Antoine Robinson on an over the shoulder fade for a 34-yard score pulling the lead to 35-0.

Later in the second Davis connected with Malik Heath on a quick pass. The play seemed to produce some short yardage, but Heath danced past multiple Wildcat defenders and took it 34-yards for a score as the second half came to a close. Going into the locker rooms Co-Lin led 42-0.

In the second half, the Wolves only score came from a touchdown pass from Davis to Robinson. Davis placed a great ball to the streaking Robinson. The score gave Co-Lin a 49-0 lead.

For the remainder of the contest, Co-Lin’s offense was more conservative, but the Wolves’ defense continued to shut down the Wildcats’ offense. Late in the fourth PRCC was driving, and got into Co-Lin’s red zone once again. Co-Lin’s defense made an epic stand from inside their 10-yard line to maintain the shutout as time expired securing the 49-0 win.

Next Thursday’s game against No. 5 Northwest is slated for a 7 p.m. kickoff.

The Enterprise Yellow Jackets fell to McLaurin Tigers 19-16 at home Friday night. Look for a recap of the game... read more