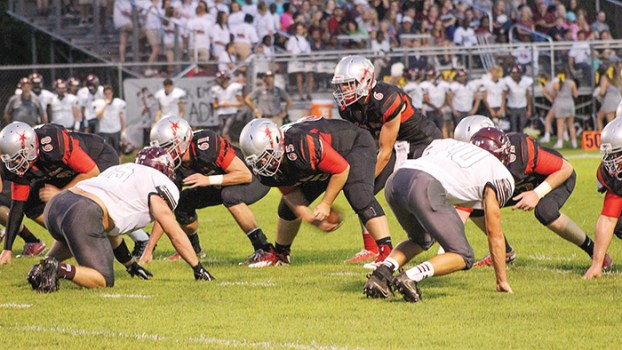 Photo by Katie Furr/The Loyd Star offense outscored Stringer 14-7 in the second half on Friday. Loyd Star rushed for 185 yards as a team in a 41-21 loss.

Stringer came out strong in the first half, racking up 34 points to Loyd Star’s 7, mostly due to turnovers by the Hornets.

“The game would’ve been a lot closer if we hadn’t turned the ball over in the first half,” said senior Logan Smith. “We played better in the second half and never quit.”

Both teams struggled on their opening drives as fumbles would bring the drives to an end.

The Red Devils found the end zone first, recovering a Hornet fumble on the 27-yard line. Red Devils senior quarterback Cayleb Dyess connected with senior Connor Kicks for a 27-yard touchdown pass. Hitting the point after kick, Stringer led 7-0, which would be the score after the end of the first quarter.

The Red Devils’ offense heated up in the second quarter as senior running back Anthony Thomas busted through the Hornet defense for a 97-yard touchdown run.

Loyd Star came close to scoring their first touchdown soon after on a 70-yard run, but Stringer was able to strip the ball around the 5-yard line.

Stringer soon found the endzone again on a 65-yard pass from Dyess to Thomas.

The Red Devils scored their last touchdown of the first half on a 20-yard pass from Dyress to Thomas. The PAT would have to wait for roughly 30 minutes as the game was halted due to lightning.

The Hornets finally found the endzone as senior quarterback Dane smith connected with senior Je’Mario Clay for a 75-yard touchdown.

The Red Devils scored the final touchdown of the first half off a 55-yard pass, to lead 34-7 at halftime.

Coming out after halftime, the Hornet defense stepped up and forced Stringer to punt the ball away for the first time of the contest.

“We had three turnovers early and it’s hard to overcome that,” said Hornets coach Brian Ford. “The turnovers cost us some points. You just can’t turn the ball over against good football teams.”

“Versie Wilson is young and we try to bring him on slow,” he said. “We went to him tonight in the later part of the game. I thought he did a good job at finding holes to run through. He has good qualities like not putting his head down when something bad happens or he makes a mistake.”

Starting on the 39-yard line, Loyd Star started to move the ball down the field on the legs of the freshman Wilson. The Hornets eventually made their way down to the 8-yard line but turned the ball over on downs after failing to put the ball into the endzone.

Stringer would lead 41-7 going into the final frame of the game after recording a touchdown on a 58-yard pass.

The Hornets scored their second touchdown of the game as Smith connected with Branden Ezell for 45 yards.

The Hornets scored the game’s final touchdown off a 22-yard run by senior Zach Nevels.

Editor’s note: A portion of this story was omitted from Saturday’s edition. It is republished in its entirety here.

It was another case of “close, but no cigar,” for the Enterprise Yellow Jackets (0-5) on Friday, as they saw... read more