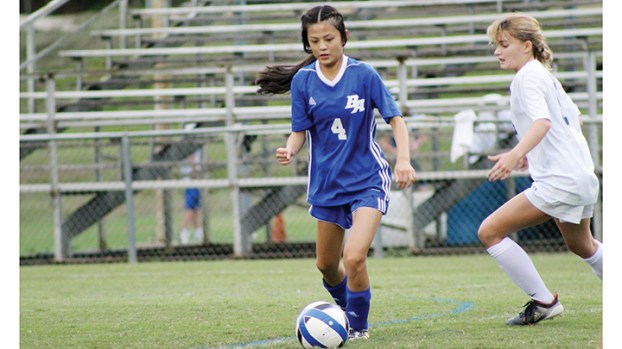 Photo by Katie Furr/Anna Caroline Adams of Brookhaven Academy tries to keep the ball away from a Laurel Christian defender. Adams would score the game winning goal on Monday night in a 3-2 overtime win against Cathedral.

The smallest player on the field made the biggest play of the match on Monday night for the Brookhaven Academy Lady Cougar soccer team, as freshman Anna Caroline Adams scored the game-winning goal in a 3-2 overtime victory over Cathedral.

The goal came in the first of two overtime periods. Adams made a touch the Cathedral keeper deflected back to her. With two defenders closing in on her side and the keeper on the ground in front of the goal, the left-footed Adams tapped her own rebound over the prone Cathedral goalkeeper to notch the game winner.

With all the physical contact in front of the net, the Cathedral keeper stayed down for some time to be attended by the training staff. She would eventually be replaced.

Adams wasn’t worried about getting knocked down in the scrum for the ball — she just wanted to put the ball into the net.

“I wasn’t worried about getting hurt, I was just happy to score the goal,” said Adams.

The goal was Adams’ eighth of the season.

The game was a continuation of a postponed match that began on Aug. 16, but was stopped due to rain and lightning. When play began there were 60 minutes remaining with Brookhaven Academy leading 1-0.

Cathedral would tie the match up 1-1 around the midway point.

BA would reclaim the lead on a high-arching shot by sophomore Makayla Martin that drove the Cathedral keeper backwards as the ball floated just out of reach. It was the 13th goal scored by Martin this season.

Any thoughts of BA winning in regulation were quickly dashed when Cathedral responded back with a strike that tied the match at 2-2.

The previous meeting between the teams had gone to penalty shoot-out after the outcome couldn’t be decided during the overtime periods.

Adams and her left foot made sure that didn’t happen again.

“Cathedral has four talented offensive players,” said Brookhaven coach Mark LeBlanc. “Our defenders did a great job of staying in front of them all game and we made them shoot everything from outside the box. Our two center backs — Maggie Sanford and Lindsey Norton — did a great job of clearing everything to a sideline.”

The win does not clinch a playoff spot for the Lady Cougars, but it does put them in the driver’s seat for second place in their district, which would qualify them for the postseason.

BA dropped both of their matches to Laurel Christian, a team that Cathedral has yet to play. Finishing the sweep of the Green Wave was the first step in the process. Now the Lady Cougars must beat Adams County Christian tonight and Discovery Christian in their season finale in order to lock up second place.