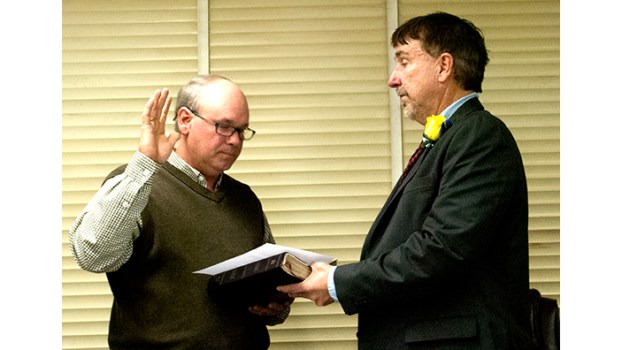 Ricky Welch (left) renews his oath on Jan. 5, 2016, to serve the children of Lincoln County while Superintendent Mickey Myers presides over the proceedings.

LCSB will appoint another member

The Lincoln County School Board will hand-pick another member after accepting the resignation of one of its trustees Monday.

District 3 representative Ricky Welch was missing from Monday’s monthly school board meeting after submitting a letter of resignation, effective immediately, on Sept. 10. The board has 60 days from that date — until Nov. 2 — to appoint someone to fill the remainder of Welch’s term, which ends Jan. 7, 2020, following the 2019 general election.

“It has been a privilege and an honor to serve as a board member and trustee for the Lincoln County School District,” Welch’s letter said. “This is a strong school district with skilled and knowledgeable administrators and faculties. I feel comfortable that my replacement will strive to do the very best of their ability to serve the district and the communities in which they will represent.”

Welch’s resignation came the next business day after qualifying for this year’s Nov. 6 general election for three other seats on the school board ended. Justin Laird will ascend to the board unopposed in District 1 for a six-year term; District 2 incumbent Johnny Hart will face retired coach Billy Vaughn for a six-year term; and District 5 incumbent Joanna Posey will face physical therapist Tim Cunningham and retired teacher Lora Hedgepeth in a special election for a four-year.

According to state law, the board would have had the authority to appoint Welch’s successor from qualified candidates in District 3 no matter when the resignation occurred, but a disagreement over the appointment could have been settled by adding the district to the ballot had the resignation come five months prior to the election. In order to be in this year’s race, Welch’s resignation would have had to have come prior to June 5.

Welch did not immediately return messages seeking comment for this story.

“I commend Mr. Welch for his service,” Lincoln County School District Superintendent Mickey Myers said Monday evening. “He’s looked out for the best interest of not only Bogue Chitto but the entire district.”

Welch was first elected to the school board in 2008 and won the seat again in 2015 after serving a seven-year term. According to an election calendar maintained by the Mississippi Secretary of State’s Office, elections for school board districts 3 and 4 should be this year.

The board’s election cycle is off-kilter, and appears to have been so for the last several years.

As it stands, the board will appoint a replacement for Welch who will fill out the remaining year of his term and run again in 2019. The board has flexibility in choosing the next District 3 representative.

“There’s nothing to stop you from talking to anyone to see if they want to put their name in the hat,” said board attorney Jim Keith. “There’s no application process — people can send letters, or email the superintendent, or tell you verbally. If anyone is interested, put your request in writing and get it to Mr. Myers.”

The greatest need for the campus at West Lincoln Attendance Center is a new annex building containing four to six... read more