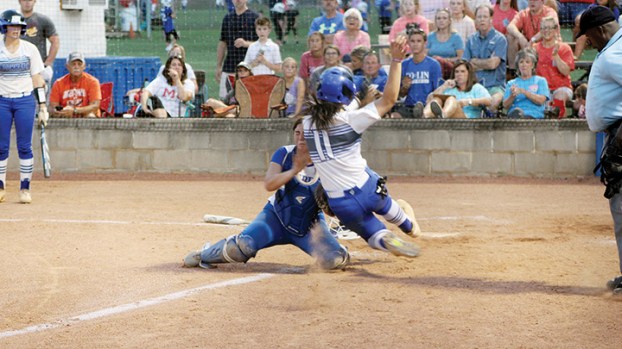 Photo by Cliff Furr/Freshman Abby Grace Richardson slides in to home-plate in a 5-3 Brookhaven Academy win over ACCS on Tuesday night. Richardson would be called out at the plate, but finished the game with four RBIs on three hits.

The most successful season in Brookhaven Academy softball history now rolls toward the post-season, as the Lady Cougars wrapped up their regular season schedule with a 5-3 win over Adams County Christian on Tuesday night.

The Lady Cougars go into the AA South State Tournament with a 29-3-1 record. The school has had slow-pitch success in the past, but nothing like this season, when the team ripped off a run of 25 games without a loss before dropping their first game on Sept. 11 to Clinton Christian.

On Tuesday, coach Becky Flowers used the game as a final tune-up and threw both of her pitchers — starting freshman Emily Claire Felder and relieving her with sophomore Madi Smith.

The game was tied 3-3 through five innings as ACCS pitcher Becca Cowen did a good job of keeping the Lady Cougars’ offense at bay. Cowen would have to be replaced due to an injury late in the game, and BA would do their most damage against the relief pitcher.

For Brookhaven it was the top of the order that did the heavy lifting, as freshman Madison Moak set the table with two triples.

After ACCS had tied the game at 1-1 in the top of the third, Moak shot life into the Lady Cougars’ offense with her first triple of the game. Moak would score when fellow freshman Abby Grace Richardson drove her home with an RBI double.

Richardson, the shortstop and No. 2 batter in the lineup, went 3-for-3 while scoring one run and knocking in four RBIs.

The duo of Moak and Richardson would replay their RBI connection again in the fifth, when Moak once more led off the inning with a triple. Richardson would score her on the next at-bat with a single. That run tied the game at 3-3 with no outs, but Brookhaven would not plate another run until the bottom of the next inning.

In the BA half of the sixth, the game would be won by who else, but Richardson. With two outs, junior Kaylie Burgess would keep the inning alive with a single. Moak would be hit by a pitch and then the duo would both score on a Richardson single.

Next up for the Lady Cougars is the Saturday portion of the South State tournament that will take place in Liberty. BA will play Lamar Christian at 9 a.m. on Saturday. If they win, they’ll face Franklin Academy in an 11 a.m. winner’s bracket game.

“We’ve played eight games in the last seven days, so we’ll take a day off after winning this one and give the girls a chance to rest a little,” said Flowers. “We’ll be ready to play bright and early Saturday morning and I’m excited to see how the girls perform.”

A long, successful season that started in July will come down to one important weekend.

Jana Case — one of only two seniors on the team — knows her team has the potential to win the weekend after they finished second in the same tournament last year.

“We’ve got to stay focused and play together as a team,” said Case. “Tonight wasn’t our best game, but we’ll be ready this weekend.”

One thing the Lady Cougars excel at is winning close games. They are 8-2 this season in games decided by two runs or less.