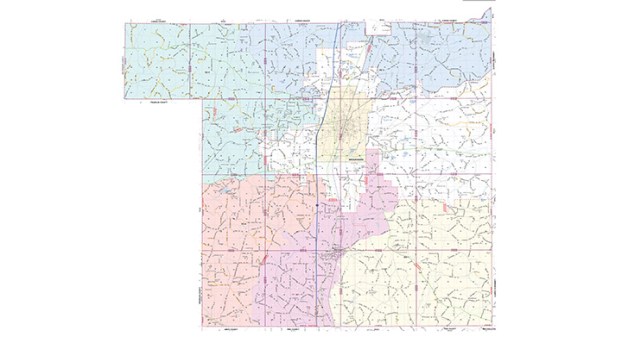 Check maps before applying for board

Tate McCaffrey is living on the edge.

Not in a rock n’ roll sense — he’s a stable guy, with a specialist position at ExxonMobil, a wife and four kids at school in Bogue Chitto. But when it comes to political subdivisions, he’s standing on a razor.

Welch was Bogue Chitto’s man, and so is McCaffrey. He’s an area descendant, a sports booster, well-known, votes at the volunteer fire department, probably as close to a shoe-in as a “candidate” can get. Messages of support rolled in for him on social media.

But late Tuesday night, not long after he applied to the board, he was alerted his home on the north side of McCaffery Trail Southwest is actually in Educational District 4, a West Lincoln stronghold. He double-checked at the Lincoln County Circuit Clerk’s website and found not only is he in District 4 — represented by school board president Diane Gill — he’s supposed to be voting at Johnson Grove, not the fire department.

“There’s a sense of pride and passion I have for our school at Bogue Chitto, and not being able to have the opportunity to sit in that seat is very disappointing to me,” McCaffrey said. “It was an honest mistake — I just assumed I was in that district.”

Confusion in the county over district lines is common. Lincoln County residents — McCaffrey included — refer to the school board educational districts as “Bogue Chitto’s district,” or “West Lincoln’s district,” but that’s not technically true.

While each of the educational districts encompass most of the school attendance zones nearest them, there is not a true district for each school, and with five districts and four schools, there never will be. There is plenty of overlap where the various zones meet — like McCaffery Trail — where families go to school in one place, but vote for representatives in districts associated with other schools.

No school “owns” a school board member district, and the shape of the two maps has led to plenty of misunderstandings about who can run, and who can’t. Even the circuit clerk’s website ordered its original map reprinted, split in two, to more clearly show the information.

McCaffrey said he’s been waiting for a chance to join the school board for several years, and he can have one next year, when Gill’s term expires and Educational District 4 hits the November 2019 ballot.

But despite the hard truth of the district and attendance lines, the perception that board members “belong” to certain schools will likely hurt his chances.

“I think it would be extremely hard for a Bogue Chitto person to win that seat. Somebody who’s active at West Lincoln is who’s gonna win that seat,” McCaffrey said. “No different than Bogue Chitto. It’s just the way things are. The common thought would be, ‘He’s just gonna be worried about Bogue Chitto.’”

It’s something residents in the south of Lincoln County need to consider — the school board has until the first week of November to appoint a member to serve out the remaining year of Welch’s term before the seat is up for election in 2019, and interested “candidates” are encouraged to write, email or call the district office and declare their interest in the appointment. The board’s next meeting is at 5 p.m. Oct. 15 at the central office, and it could appoint the new member then.

But first, check the map.

“If anybody is interested, please check out the website,” said Lincoln County Circuit Clerk Dustin Bairfield. “We keep them online to try to clear up any confusion out there. We do encourage people to ‘run,’ and we want the people who care about the best interests of our children to run for this school board position.”

There is only one map that applies, and it can be viewed by clicking the blue “forms” button at www.dustinbairfield.com. It’s named “SCHOOL BOARD 36x48_201807,” and it shows the county’s five educational districts in contrasting colors. Another map — “SCHOOL DIST 36x48_201807” — shows the school attendance zones.

In the meantime, elections for three other school board seats are coming up Nov. 6.

Justin Laird is running unopposed for Educational District 1 after longtime incumbent Kay Coon decided not to seek reelection. He will serve a six-year term.

The school board is working to get back on the appropriate election schedule after “missing” elections for districts 3 and 4 in 2014, and District 5 in 2016. As a consequence of Welch’s previous seven-year term (2009-2016), districts 3 and 4 were held to five-year terms instead of six and are up for reelection next year, while Posey — who was appointed after her father-in-law, Michael Posey, resigned — served out two years and will run for a four-year stint this year.

The school board asked the Mississippi Attorney General to approve the new sequence, but the office issued an opinion on Feb. 5 this year in which it declined to endorse the plan.

The AG’s office laid out the schedule — according to information provided by the board through its attorney, Jim Keith — which has Districts 1 and 2 on-track, requires make-good elections for Districts 3 and 4 in 2019 and the next District 5 election in 2022 (hence the special election for a four-year term in 2018).

But the AG’s office stops short of approval.

“You may wish to seek a court order or court approval of any plan designed to reestablish compliance with the above election schedule,” the opinion says in closing.

The Mississippi Secretary of State’s Office maintains an election calendar that lists school board districts, but the office claims it is only a reference point, as school board elections vary from county to county.

A Brookhaven alderman balked at the purchase of land on North First Street for a fire station, even though it... read more