Coon steps aside to focus on family

Kay Coon was a good wife.

When her husband, the late Jerry Coon, found out liver cancer was going to strike him down in a matter of months, he sat his wife down for a series of long talks and made two simple requests — take care of the family, and take care of the county schools. He died in April 2003 after more than 20 years on the Lincoln County School District Board of Trustees, and his wife was appointed to fill his vacancy shortly afterward.

She accepted, and has been on the board ever since. But these are the final days, the end of her last term, and a new board member will take her place representing Educational District 1 in January after Coon decided not to seek reelection.

She has tried to honor Jerry’s first request for the last 15 years, and she’ll honor his second one in retirement.

“I have a great-granddaughter facing some surgery, and I just want to be able to be there for her, and to support my family and help out,” Coon said. And, I’m gonna be 74 years old in December — another six-year term would have made me 80. It’s time for the young adults to step up and do the job.”

Coon said she’s proud of the academic and enrollment growth of Lincoln County’s four attendance centers during her tenure — especially the Lighthouse Awards School Leader Awards the board earned from the Mississippi School Board Association in 2014, and the Lantern Award the same organization gave it in 2013 for all “As” and “Bs” on accountability results.

She’s also proud of the work the board and district have done to increase college and career readiness.

Coon said she’s pleased by the brick-and-mortar progress each county school has made in recent years, with numerous facility upgrades and renovations carried out across the district. She regrets not being able to see the completion of several needed projects currently under the board’s consideration, and she hopes the next board carries on — and with around $7 million in construction funds, saved up mainly from 16th Section funds over the years, and a developing list of campus priorities, it should.

Construction should be a simple matter, but one of Coon’s parting hopes may be more complicated.

“I would like to see us be able to get out of testing so much — just go back to teaching, and not worry about teaching to a test,” she said. “That’s one thing we haven’t been able to get done, but of course that’s not us, locally, who makes that decision.”

Coon said she wasn’t sure if she was going to seek another term in office, and her mind still wasn’t made after qualifying began back in August. She was on the fence, but decided to bow out after speaking to Justin Laird, the man who is running, unopposed, for her seat at the board.

“First question I asked him was, ‘Are you a Christian?’ He said he was, and then I asked him, ‘Do you believe in consolidation?’ And he said, ‘No.’ He had both of those answers right,” Coon said. “I felt comfortable about stepping aside after talking to Justin. I think the board will be in good hands.”

Coon plans to remain a supporter of Enterprise Attendance Center, where her family has attended since her mother-in-law, the late Ada Pearl Douglas Coon, graduated from the school’s first class in 1932. Her granddaughters — recent Enterprise graduates Jana and Carlee Nations — are now at Jones County Junior College, but she has a grandson in seventh grade and a great-grandson in kindergarten, both at Enterprise. Her great-granddaughter will be a Yellow Jacket in a few years, too.

“I’ll still be involved,” Coon said. “I’ll be doing whatever I can at Enterprise for a while yet.”

Enterprise Principal Terry Brister is glad of that. Coon was a new board member when he first took office as superintendent in 2004, serving in that capacity until Mickey Myers was elected in 2015.

“Mrs. Kay Coon and her family have dedicated their lives to making sure we had, and were able to keep, Lincoln County schools,” he said. “Thanks to her leadership and her desire to keep our community schools, our children have the opportunity to be a part of a small, community school environment.”

Myers called the service of both Coons — more than 35 years combined — “unbelievable.”

“She has been an asset to this district, and a faithful servant to her church, community and the Yellow Jacket family,” he said. 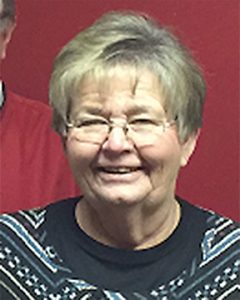