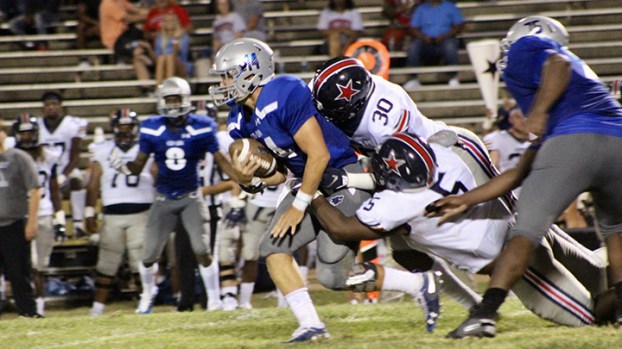 Photo by Cliff Furr Co-Lin quarterback Hayden Davis is dragged down from behind by a pair of Northwest defenders. Davis would finish 10-of-14 for 191 yards and two touchdowns, but would also be sacked five times.

No. 5 Northwest slips past Co-Lin

The scoreboard in the south end of Stone Stadium read 23-14 in favor of the visiting No. 5 Northwest Rangers at the end of Thursday night.

The game was closer than that, though, as Copiah-Lincoln would see opportunity after opportunity to take a late lead in the game slip away. With nine minutes remaining and Northwest holding a 16-14 lead, Wolfpack quarterback Hayden Davis hit wide receiver Kundarrius Taylor with a 48-yard bomb that ended with Taylor being tackled at the Northwest 18-yard line.

It felt like the big play would allow Co-Lin to take back momentum in a game they led 14-7 at halftime, but the next three plays would go nowhere as Co-Lin was forced to attempt a 35-yard field goal. The kick would sail wide right to the disappointment of the large home crowd.

That would be as close as Co-Lin would come, and Northwest would add a late insurance touchdown when the outcome had already been decided.

All night long, Co-Lin had penalties that either killed their drives or extended a Northwest opportunity. On the scoring drive that saw Northwest cut the Co-Lin lead to 14-13 early in the third quarter, a roughing the passer call against the Wolfpack would aid the Rangers.

Wolfpack coach Glenn Davis said those mistakes were ultimately the undoing of his team.

“We got too many 15-yard penalties on both sides of the ball and that was the difference in the game,” said Davis. “You can’t give good teams extra opportunities or extra downs.”

Co-Lin would be flagged eight times for 86 yards in penalties, compared with three penalties called against Northwest that cost the Rangers 45 yards.

The Co-Lin defense was fast and physical all night, as they played admirably against a Ranger offense that came into the game averaging 500 yards per contest.

Co-Lin outgained Northwest through the air with 211 yards passing, compared to 164 by the Rangers.

The Northwest ground game would grind down the Wolfpack defense, though, as the Rangers gained 136 yards on 37 carries. Co-Lin would gain only 27 yards rushing in the game.

When Co-Lin first-down runs came up fruitless in the second half, the Ranger defense was able to pin back their ears on throwing downs and put heavy pressure on the Wolfpack quarterback.

Co-Lin had Northwest on their heels early, as the second Wolfpack drive would culminate with an 18-yard touchdown pass from Davis to Malik Heath at the 9:29 mark of the first quarter.

Northwest tied the game with 1:03 remaining in the same quarter when Kevin Perkins scored from the 1-yard line.

The Davis-to-Heath connection would give Co-Lin the lead with 3:25 remaining until halftime. This time the pair hooked up from 29 yards out.

Heath — the top-ranked high school wide receiver in the state last year as a senior — went up and high-pointed the ball over a helpless Northwest cornerback.

The touchdown was set up by an athletic interception by Co-Lin defensive back Edwin Whitlock. Whitlock broke on a slant pass and tipped the ball into the air, where he wrestled it away from the Northwest receiver.

Co-Lin (2-2, 1-0 South Division) now must move on to a trip next Thursday to Perkinston. Their opponents will be the No. 12 Mississippi Gulf Coast Bulldogs. Gulf Coast dropped a 16-13 loss to Jones on Thursday night in Ellisville.

In a league where every team is made up of freshmen and sophomores, Davis says Co-Lin is one of the youngest. How they bounce back from the close loss to the No. 5 Rangers will most likely decide the success of their season.

“We’re younger than we usually are and we’ve got to execute better,” said Davis. “We’ll find out a lot about ourselves next week.”

The Southwest Mississippi Association of Soccer Officials will have a mandatory meeting for those interested in serving this season as... read more