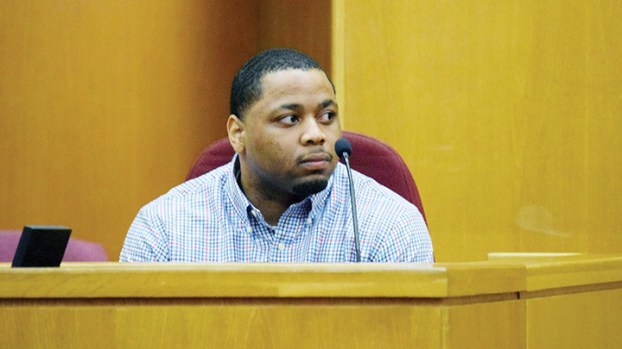 Daily Leader file photo/Cordarryl Bell is being tried a second time for first-degree murder charges in the 2015 shooting death of Aquarius Nelson.

A jury has been chosen and proceedings are underway in the second trial for a Brookhaven man accused of murder nearly three years ago.

The retrial for Cordarryl Bell began late Tuesday afternoon after a jury of 10 white women, two black women and two white men were empaneled to decided his fate on charges of first-degree murder in the Nov. 2, 2015 shooting death of 26-year-old Aquarius Nelson.

Prosecutors allege Bell lured Nelson to the house where he sometimes stayed at 115 Walnut St. and murdered him in the front yard, while defense attorney Imhotep Alkebu-lan claims the shooting was in self-defense, and that Nelson had come to the residence to murder Bell. Bell fired several rounds of .40-caliber at Nelson, striking him twice in the back.

“I told Aquarius to get back. He turned around to walk away, and I seen him motion like he was reaching for a gun, and when he turned I started firing,” Bell testified during his first trial. “I felt like if I didn’t shoot him, he was gonna shoot me.”

The case was tried over the course of three days in April of this year, but ended in a mistrial after jurors were unable to reach a unanimous decision after four hours of talks.

Prosecutors are hoping to avoid a repeat of the second day of proceedings earlier this year, when several witnesses gave conflicting testimony and planted doubt in the minds of jurors.

Bell took the stand as the final witness, alleging the driver of the car that brought Nelson to the scene of the shooting was Lattrick Williams — not Joshua Cole, a cousin of Nelson’s who sped him away to his resulting death at King’s Daughters Medical Center.

Prosecutors say police interviewed Cole in the hospital parking lot, but Bell alleges Williams and Nelson stopped somewhere in their neighborhood to hide their guns and change drivers before making a mad dash on shot-out tires to KDMC. Bell claims the duo were out to kill him mistakenly as revenge for the shooting of 41-year-old Christopher Stringer the previous day — Stringer was only wounded, and Bell claims he did not pull the trigger.

Stringer, meanwhile, is facing numerous felony drug charges in Lincoln County. He was apprehended by Monticello police following a high-speed chase around Lawrence County on May 29. Brookhaven police suspect Williams in the Aug. 31, 2017 armed robbery of State Bank and believe he was possibly in a black Tahoe that officers from multiple agencies pursued in a high-speed chase through Brookhaven and Lincoln County earlier this year.

Williams has made social media posts mocking Brookhaven police and asserting his innocence, claiming to be moving around the state to avoid capture.

VFDs plan to ‘Fall on the Pearl’

Fall is in the air for the next few months, but specifically on the Pearl River Oct. 6. Fall on... read more