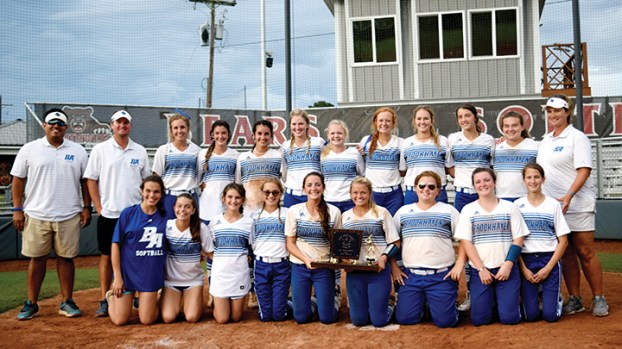 It started on Saturday, picked back up Monday and finally finished Tuesday afternoon.

When the MAIS AA South State Tournament was finally completed, it was the Brookhaven Academy Lady Cougars who held the trophy high after beating Clinton Christian 11-3 in the championship game.

The tournament started on Saturday in Liberty and was scheduled to finish there on Monday. However, rain forced the games to be postponed after beginning on Monday, and they were moved to the campus of Southwest Mississippi Community College on Tuesday.

When play was stopped on Monday, the Lady Cougars were battling Clinton Christian in the championship of the winners’ bracket. The game was tied 6-6 in the sixth inning when it was postponed.

On Tuesday, when play resumed, the game went into extra innings before BA pulled out an 8-7 victory. The win was huge for the program, as the Lady Warriors had previously dealt Brookhaven Academy two of their three losses this season. Since joining a district with Clinton Christian last year, the Lady Cougars had yet to beat the Lady Warriors before Tuesday.

“They have such a talented pitcher, and I knew that beating them for the first time would do so much for our confidence,” said Lady Cougars head coach Becky Flowers.

In the win, Brookhaven Academy got five RBIs from freshman Emily Clare Felder via her two home runs. In the top of the eighth inning — with the tie-breaker rules in place in a 6-6 game — Madi Smith was placed on second to start the inning for BA. Smith moved to third on a stolen base and scored the go-ahead run on an Abeni Fuller sacrifice bunt. The Lady Cougars would add an insurance run to push their lead to 8-6 on a Melody Smith sacrifice bunt that scored Marie Clanton.

With the win, BA moved on to the championship game and therefore forced whoever they would face to beat them twice.

Clinton Christian would win their elimination game and come back to face the Lady Cougars for the second time on the day.

In game two, it was nothing but Lady Cougar domination, as they whipped Clinton in an 11-3 victory.

The game was tied 2-2 in the sixth inning before BA exploded for nine runs to break it open. Junior Hallie Creel hit a home run for the Lady Cougars and freshman Abby Grace Richardson added two doubles. Freshman Madison Moak hit a triple and drove in three runs.

The Lady Cougars got to the winners’ bracket championship with three wins on Saturday. They opened the tournament with an early-morning, 9-2 win over Lamar Christian. BA got a dinger apiece from Richardson and Creel in the win.

They followed that up with a 10-0 blowout of Franklin Academy. In the win over Franklin, Felder tossed a no-hitter while striking out six. Richardson put another ball out of the yard against Franklin and sophomore Madi Smith added a home run as well.

In their Saturday finale, the Lady Cougars went up 4-0 on Amite School Center before holding the Lady Rebels off for a 4-3 win. The Lady Cougars’ bats stayed scorching hot, as they piled up 11 hits against ASC. As a team, BA posted 32 hits during their 3-0 run on Saturday and hit seven home runs over the course of the tournament.

“We’ve had some girls that started playing on the varsity team as seventh-graders and they’ve always believed that we’d reap the rewards of their hard work,” Flowers said. “They’ve been on this level long enough that they don’t get bothered by pressure and they showed that in this tournament.”

The Lady Cougars (34-3-1) next play on Saturday in the MAIS AA State Tournament. Their opponent will be the fourth seed from the north and the game will begin at 10 a.m. at the Sportsplex in Magee.

The tournament is double elimination and continues on Monday. The team who comes out on top of the winners’ bracket will play the team that battles back to take the losers’ bracket in a three-game series later in the week. The just-described, complicated bracket is available online at msais.org under the “athletics” tab.

Last season, the Lady Cougars finished second in the state tournament after placing third in the south state version.

Flowers says her hard-hitting squad is ready for their next challenge, even if they just got finished with their last one.

“Winning this tournament was big, but we’ve got even bigger goals left to achieve,” said Flowers.

Brookhaven high softball coach Mandy Vinson and her team have a new rallying cry after their Tuesday night game at... read more