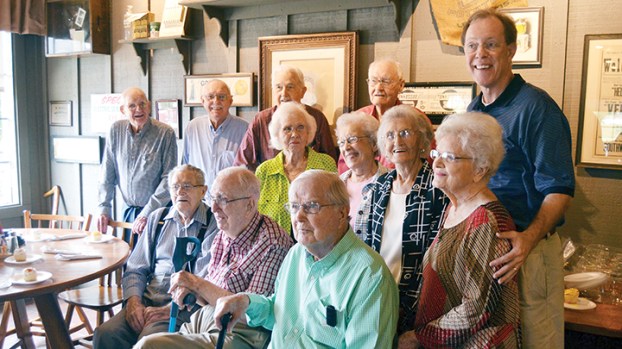 Fortunately, there were no candles to blow out.

It would have taken a lot of deep breaths and the addition of a few more oxygen tanks for the group to extinguish all 1,030 flickering flames needed to properly mark the years of this birthday celebration.

The 90s Club hosted its annual birthday party Wednesday at Cracker Barrel, where hot coffee, sweet tea and good times flowed freely. Cupcakes were the dessert of choice, but only after plates of biscuits and cornbread made the rounds and waitresses toted trays of chicken pot pies and blue-plate specials to deliver to their hungry diners.

This is the group’s sixth year to gather for their celebratory lunch to mark another year in the books. It started with Sunday School friends Cecil Rhodes, Julius Summers, Frank Burns, Ralph Calcote and John Smith, though it was Jack Combs who came up with the idea.

Rhodes said several people were turning 90 in their Sunday School class that year, and Combs said he wasn’t going to five separate parties — but he’d go to one.

Summers moved to Tupelo and Smith passed away, leaving Rhodes, Burns and Calcote in charge of the party.

The three men were joined Wednesday by eight other birthday boys and girls who are at least 90 years old. They also invite others from church to join them even if they’ve got a few years to go before they’re eligible to become official members.

Rhodes recently turned 98 and the almost-centenarian likes to joke that his crew are recycled teenagers.

Rev. Greg Warnock, their pastor at First Baptist, believes that could very well be true.

Jeff Doremus, the education pastor at FBC, has watched this group of elders for his 12 years at the church.

“The thing that I have learned about this 90-year-old group, they stay active with their bodies and their minds,” he said. “They get up with places to go, things to do and people to see.”

Doremus said the 90s Club is a great example to the young people at FBC.

“Everybody should have the kind of outlook they have,” he said. “They are happy to be out and about and enjoying life.”

Sandra Massey is one of those who come to the party to test the waters. At 75, she’s not ready to become a card-carrying member but loves to get together with them for the yearly lunch.

“Most of them have more energy than I do,” said Massey, who teaches the Faith Sunday School class at FBC.

Lois Hart’s daughters came this year even though they buried their mother Dec. 12 — her 93rd birthday. Rhodes, who lived across the street from Hart, invited the two women to join them Wednesday.

Connie Boyd and Diane Davis enjoyed their meal and being surrounded by women and men who knew their momma.

“She loved the fellowship,” Boyd said. “All these ladies were her friends.”

Lincoln County’s unemployment rate fell in August for the second consecutive month after seasonal summer workers dropped out of the... read more