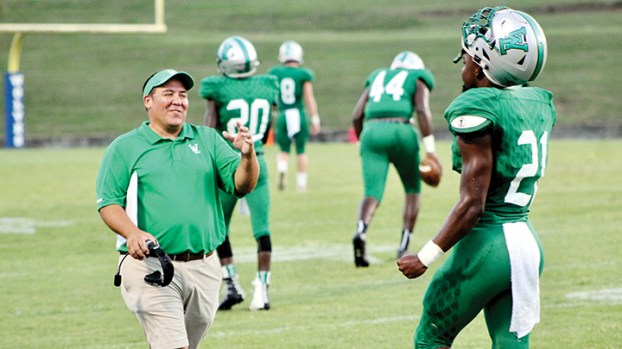 Photo by Cliff Furr West Lincoln head coach BJ Smithhart gives encouragement to Michael Brothern. West Lincoln is trying to become the first county school to beat Amite County since the Trojans moved down to 2A.

The West Lincoln Bears (2-4) look to bust their four-game losing streak tonight in Liberty when they take on the Amite County Trojans (0-6) to open region play.

Amite County is the defending Region 7-2A winner after going 4-0 in the league last season. Since 2011, when the Trojans moved down from 3A into a division with Lincoln County teams, they have not been beaten by West Lincoln, Enterprise, Loyd Star or Bogue Chitto. During that period the Trojans are 19-0 and have won by an average margin of victory of 48-10.

Though they are winless this season, West Lincoln coach BJ Smithhart is not taking the Trojans lightly. He sees a team that has been punching above their weight class so far this season.

“They’ve played nothing but bigger schools and have gone against some really good teams,” said Smithhart.

The Bears haven’t been playing a jayvee schedule, either. The combined records of the teams that have beaten West Lincoln over the last four weeks — Puckett, Pelahatchie, Pisgah and Stringer — is 21-3.

Kickoff in Liberty is scheduled for 7 p.m.

The Brookhaven High School Panthers (4-1) head between the bricks tonight when they take on the Laurel Golden Tornados (2-3)... read more