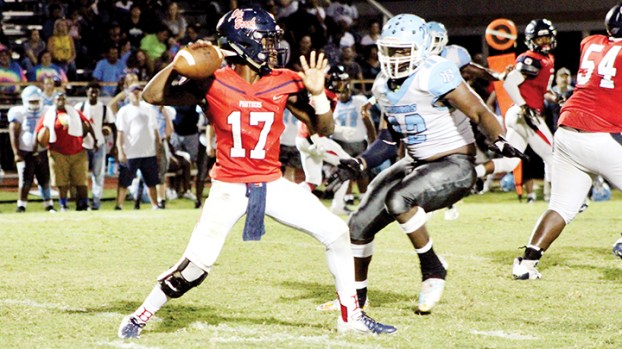 Brookhaven quarterback Sevante Quinn throws in the face of pressure from North Pike defender Jace McCoy. The Panthers are attempting to win at Laurel for the first time since 2013 when the Golden Tornados joined their region.

The Brookhaven High School Panthers (4-1) head between the bricks tonight when they take on the Laurel Golden Tornados (2-3) at historic Watkins Field in Laurel.

Laurel is led by running back Zias Perryman. A muscular, 5-foot-10, 215-pound senior, trying to bring down Perryman is akin to tackling a bowling ball.

In the 2017 regular season matchup of these two teams, Brookhaven jumped up to a 28-7 halftime advantage over Laurel before Perryman exploded for three rushing scores in the second half. Brookhaven was able to go up and then hold Laurel off late in a 42-35 win.

The mission tonight is to do something that no Brookhaven team has done since the teams moved into the same region in 2013 — win in Laurel. Last season, the Golden Tornados ended the season for BHS with a 26-22 win on Watkins Field in the second round of the playoffs.

Brookhaven head coach Tucker Peavey says his team has worked through the wet weather this week, as they have looked to address issues from their 27-14 win over North Pike.

“We’ve had a good week of practice and I think it helped us to get outside and practice with a wet ball and get some work in during the rain,” said Peavey. “Against North Pike we had some communication issues, and we’ve worked with the line to be better at talking to each other, so we’ve got everyone accounted for.”

Kickoff at Laurel is scheduled for 7 p.m.

The 2018 edition of the Possum Bowl looks to be a solid matchup on paper, as the streaking Bogue Chitto... read more